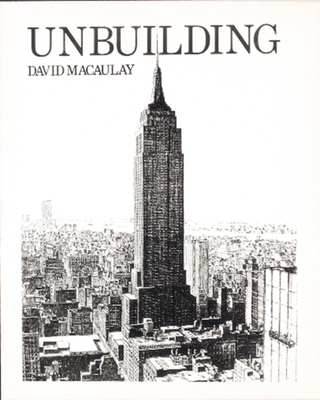 This fictional account of the dismantling and removal of the Empire State Building describes the structure of a skyscraper and explains how such an edifice would be demolished.

David Macaulay is an award-winning author and illustrator whose books have sold millions of copies in the United States alone, and his work has been translated into a dozen languages. Macaulay has garnered numerous awards including the Caldecott Medal and Honor Awards, the Boston Globe–Horn Book Award, the Christopher Award, an American Institute of Architects Medal, and the Washington Post–Children’s Book Guild Nonfiction Award. In 2006, he was the recipient of a MacArthur Fellowship, given “to encourage people of outstanding talent to pursue their own creative, intellectual, and professional inclinations.” Superb design, magnificent illustrations, and clearly presented information distinguish all of his books. David Macaulay lives with his family in Vermont.

"It is not a work of nonfiction but a work of fantasy, and not the story of the making of the skyscraper but the story of the unmaking of a very particular one, the Empire State Building . . . The exquisite drawing style that marked Mr. Macaulay's earlier works on architecture remains as whimsical as ever." The New York Times —