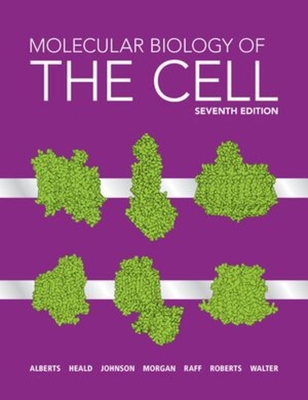 For more than four decades, Molecular Biology of the Cell has distilled the vast amount of scientific knowledge to illuminate basic principles, enduring concepts, and cutting-edge research. The Seventh Edition has been extensively revised and updated with the latest research, and has been thoroughly vetted by experts and instructors. The classic companion text, The Problems Book, has been reimagined as the Digital Problems Book in Smartwork, an interactive digital assessment course with a wide selection of questions and automatic-grading functionality. The digital format with embedded animations and dynamic question types makes the Digital Problems Book in Smartwork easier to assign than ever before—for both in-person and online classes.

Bruce Alberts received his PhD from Harvard University and is the Chancellor’s Leadership Chair in Biochemistry and Biophysics for Science and Education, University of California, San Francisco. He was the editor in chief of Science magazine from 2008 until 2013, and for 12 years he served as president of the U.S. National Academy of Sciences (1993–2005).

Rebecca Heald is an American professor of cell and developmental biology. She is currently a professor in the Department of Molecular and Cell Biology at the University of California, Berkeley. In May 2019, she was elected to the National Academy of Sciences.

Alexander Johnson received his PhD from Harvard University and is a professor of microbiology and immunology at the University of California, San Francisco. He is a member of the National Academy of Sciences.

David Morgan received his PhD from the University of California, San Francisco, and is a professor in the Department of Physiology as well as the vice dean for research for the School of Medicine. Dave is a fellow of the Royal Society of London.

Martin Raff received his MD from McGill University and is emeritus professor of biology at the Medical Research Council Laboratory for Molecular Cell Biology at University College London. He is a foreign member of the National Academy of Sciences.

Keith Roberts received his PhD from the University of Cambridge and was deputy director of the John Innes Centre, Norwich. He is emeritus professor at the University of East Anglia. Keith was recipient of the Order of British Empire for his service to sciences.

Peter Walter received his PhD from the Rockefeller University in New York, is a professor in the Department of Biochemistry and Biophysics at the University of California, San Francisco, and is an investigator at the Howard Hughes Medical Institute. He is a member of the National Academy of Sciences.

John Wilson received his PhD from the California Institute of Technology and did his postdoctoral work at Stanford University. He retired in 2015 as Distinguished Emeritus Professor of Biochemistry and Molecular Biology at Baylor College of Medicine, where he worked on genetic recombination, genome stability, and gene therapy. He taught medical and graduate students for many years, co-authored books on immunology, molecular biology, and biochemistry, and received numerous teaching honors, including the Distinguished Faculty and Robertson Presidential Awards for excellence in education.

Tim Hunt received his PhD in biochemistry from Cambridge University, where he supervised undergraduates in cell biology for more than 20 years. He spent many summers in the late 1970s and early 1980s teaching and researching at the MBL, Woods Hole, Massachusetts. In 1990, he moved to Cancer Research UK, where he worked on the control of the cell cycle. He retired from active research in 2011, and since 2016 has been at OIST in Japan. He is a Fellow of The Royal Society of London and a foreign associate of the US National Academy of Sciences. In recognition of his contribution to the “Discovery of key regulators of the cell cycle,” he received a share of the 2001 Nobel Prize for Physiology or Medicine.