The 10 Rules of Successful Nations (Hardcover) 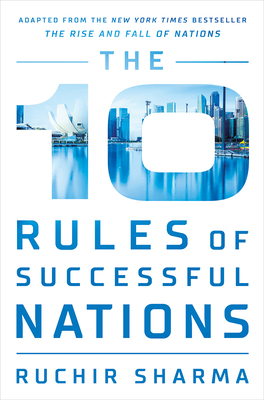 The 10 Rules of Successful Nations (Hardcover)

The 10 Rules of Successful Nations offers a pithy guide to real-world economics, adapted from the New York Times bestseller The Rise and Fall of Nations.

A wake-up call to economists who failed to foresee every recent crisis, including the cataclysm of 2008, The 10 Rules of Successful Nations is a slim primer full of pioneering insights on the political, economic, and social habits of successful nations.

Distilled from Sharma’s quarter century traveling the world as a writer and investor, his rules challenge conventional textbook thinking on what matters—and what doesn’t—for a strong economy. He shows why successful nations embrace robots and immigrants, prefer democratic leaders to autocrats, elect charismatic reformers over technocrats, and pay no mind to the debate about big versus small government. He explains why rising stock prices matter as much or more than food prices, which measure of debt is the best predictor of economic crises, and why no one number can accurately capture the value of a currency. He also demonstrates how a close reading of the Forbes billionaire lists can offer the clearest real-time warning of populist revolts against the wealthy.

Updated with brand-new data, 10 Rules reimagines economics as a practical art, giving general readers as well as political and business leaders a quick guide to the most important forces that shape a nation’s future.

Ruchir Sharma penned the international bestseller Breakout Nations and is a contributing op-ed writer at the New York Times. His commentary has also appeared in the Wall Street Journal, the Financial Times, Foreign Affairs, and other publications. He is chief global strategist at Morgan Stanley Investment Management, based in New York.
Sharma’s new book is filled with amazing data…fascinating insights and revealing anecdotes; this is quite simply the best guide to the global economy today. Whether you are an observer or an investor, you cannot afford to ignore it.
— Fareed Zakaria

Instead of pious statements about poverty, or portentous mutterings on the importance of American leadership, Mr. Sharma sees the world from the ruthless and restless perspective of an investor.
— Economist

Ruchir Sharma is a shrewd and thoughtful observer of emerging markets. His insights deserve the attention of all who care about the future of the global economy.
— Lawrence H. Summers

Sharma’s mission is as ambitious as it is well-executed. A mix of humble pragmatism and daring decisiveness make his tips compelling and credible.
— Katrina Hamlin - Reuters