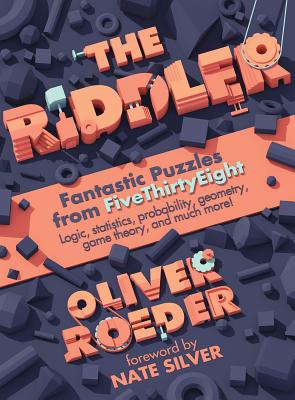 “A modern, smart puzzle book, unlike anything I’ve seen before, whose math and logic challenges will stretch your brain in new ways.”—Will Shortz, New York Times crossword editor and NPR puzzlemaster

The most mind-bending puzzles on the internet appear weekly in Oliver Roeder’s “The Riddler” column. Presented by Nate Silver’s FiveThirtyEight, this first-ever collection features the column’s most popular problems, along with six never-before-published puzzles, all exploring the math implicit in everyday occurences. The simplest require a mere flash of insight, while the toughest involve deep applications of analysis and probability theory. Designed to appeal to a range of skill levels, The Riddler is a must-have for any math or puzzle enthusiast.

Oliver Roeder has been a senior writer at FiveThirtyEight and editor of The Riddler. He studied artificial intelligence as a Nieman Fellow at Harvard University and holds a PhD in economics focused on game theory. He lives in Brooklyn, New York.