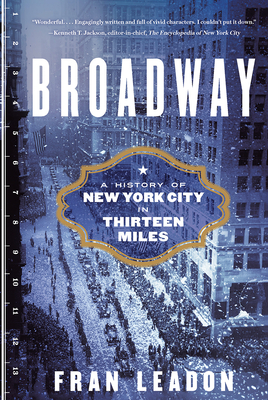 From Bowling Green all the way to Marble Hill, Fran Leadon takes us on a mile-by-mile journey up America’s most vibrant and complex thoroughfare, through the history at the heart of Manhattan. Broadway traces the physical and social transformation of an avenue that has been both the “Path of Progress” and a “street of broken dreams,” home to both parades and riots, startling wealth and appalling destitution. Glamorous, complex, and sometimes troubling, the evolution of an oft-flooded dead end to a canyon of steel and glass is the story of American progress.

Fran Leadon is an architect and coauthor of the fifth edition of the AIA Guide to New York City. A native of Gainesville, Florida, he teaches at the City College of New York and lives in Brooklyn.
Wonderful.… Engagingly written and full of vivid characters. I couldn’t put it down.
— Kenneth T. Jackson, editor-in-chief, The Encyclopedia of New York City

Meticulously researched.… [Fran] Leadon’s tale is a whirl of characters.… It is a whirl, too, of events.… Leadon is graced with a wry wit.
— Clyde Haberman - New York Times Book Review

A new history of the street that tells the story of modern America.
— David Taylor - Guardian

A magical mystery tour of the street that invented American popular culture.
— Mike Davis, author of City of Quartz

Fran Leadon… is a perfect biographer for Broadway, a main character in the development of one of the world’s great cities. His book is dense, richly written and researched, loaded with a million fun anecdotes.
— Bowery Boys blog

Well-written and very readable. I recommend it highly for anyone with an interest in New York City and its history. In following the journey up Broadway mile by mile, the reader can better understand a lot of American history and the trip is quite enjoyable.
— Richard D. Weigel - Bowling Green Daily News

Fran Leadon’s Broadway is only incidentally about the theaters that are the avenue’s famous feature, but is, as the subtitle promises, a witty and informed history of New York City—a travelogue through the past.