Accessory to War: The Unspoken Alliance Between Astrophysics and the Military (Paperback) 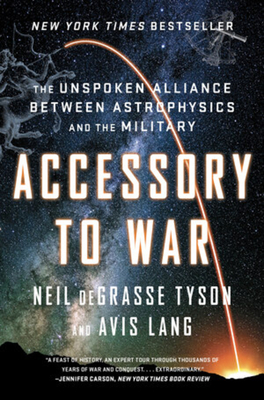 Accessory to War: The Unspoken Alliance Between Astrophysics and the Military (Paperback)

“Extraordinary.… A feast of history, an expert tour through thousands of years of war and conquest.” —Jennifer Carson, New York Times Book Review

In this far-reaching foray into the millennia-long relationship between science and military power, acclaimed astrophysicist Neil deGrasse Tyson and co-author Avis Lang examine how the methods and tools of astrophysics have been enlisted in the service of war. Spanning early celestial navigation to satellite-enabled warfare, Accessory to War is a richly researched and provocative examination of the intersection of science, technology, industry, and power that will introduce Tyson’s millions of fans to yet another dimension of how the universe has shaped our lives and our world.

Neil deGrasse Tyson is an astrophysicist with the American Museum of Natural History and the New York Times best-selling author of Astrophysics for People in a Hurry. He lives in New York City.

Avis Lang is a research associate at the American Museum of Natural History’s Hayden Planetarium. For half a decade, she edited Tyson’s Natural History magazine column, Universe, parts of which became the basis for his Astrophysics for People in a Hurry, and later edited his anthology Space Chronicles. She lives in New York City.
A sweeping panoramic overview of the enduring alliance between astrophysics and the military—from the Greeks to Galileo to GPS.
— Science

With brutal honesty, Tyson and Lang reveal how looking at the stars has always been both ‘pure’ science and an adjunct of war-making.… Thought-provoking and reflective.
— Sharon Weinberger - Nature

Archimedes and Leonardo worked for their departments of defense, and when the telescope was invented it was an immediate instrument of war. Why do astrophysicists even have jobs? asks Neil deGrasse Tyson. Now you can see the inside story, from early times to the Cold War, the Apollo program, spy satellites and the Hubble Space Telescope, the Iraq War, and perhaps asteroid mining. A wonderful book and a fascinating read, full of amazing stories, all backed up with deep scholarship.
— John Mather, winner of the Nobel Prize in Physics

Accessory to War is a phenomenal work that should be required reading for policymakers everywhere.

— William E. Burrows, author of Deep Black: Space Espionage and National Security and This New Ocean: The Story of the First Space Age

Throughout history, wars tend to be won by nations that are at the forefront of science. Thus astronomers and physicists have, since ancient times, benefited from an uneasy alliance with the military. This enlightening book explores the history and current implications of this partnership between space science and national security.
— Walter Isaacson, author of Steve Jobs and professor of history, Tulane University

Accessory to War: The Unspoken Alliance Between Astrophysics and the Military is not just about astrophysics. It is a readable account of the intersection between science and security policy, complete with historical background and personal insights and anecdotes from America’s most trusted scientist. This is a much-needed read for both policymakers and the public, who in ‘normal’ times know and care too little about science, but in today’s political climate increasingly show disdain for scientific principles that fail to fit their philosophical reality or political goals. Astrophysics is too often perceived as ‘not touching me or my life,’ but this book artfully explains otherwise.

Neil deGrasse Tyson and Avis Lang have provided a wonderful history of the interplay between scientists and warfare. From telescopes to GPS satellites, astrophysicists have been closely linked to the military. A fascinating read with a worthy message for today.
— James Clay Moltz, author of Crowded Orbits, Asia’s Space Race, and The Politics of Space Security