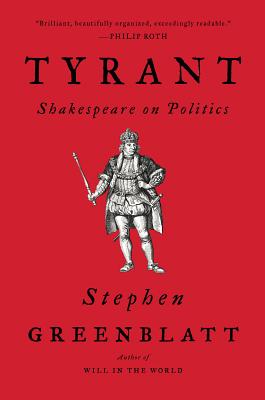 Examining the psyche—and psychoses—of the likes of Richard III, Macbeth, Lear, and Coriolanus, Greenblatt illuminates the ways in which William Shakespeare delved into the lust for absolute power and the disasters visited upon the societies over which these characters rule. Tyrant shows that Shakespeare’s work remains vitally relevant today, not least in its probing of the unquenchable, narcissistic appetites of demagogues and the self-destructive willingness of collaborators who indulge their appetites.

Stephen Greenblatt (Ph.D. Yale) is Cogan University Professor of the Humanities at Harvard University. Also General Editor of The Norton Anthology of English Literature, he is the author of eleven books, including Tyrant, The Rise and Fall of Adam and Eve: The Story that Created Us, The Swerve: How the World Became Modern (winner of the 2011 National Book Award and the 2012 Pulitzer Prize); Shakespeare's Freedom; Will in the World: How Shakespeare Became Shakespeare; Hamlet in Purgatory; Marvelous Possessions: The Wonder of the New World; Learning to Curse: Essays in Early Modern Culture; and Renaissance Self-Fashioning: From More to Shakespeare. He has edited seven collections of criticism, including Cultural Mobility: A Manifesto, and is a founding coeditor of the journal Representations. His honors include the MLA’s James Russell Lowell Prize, for both Shakespearean Negotiations: The Circulation of Social Energy in Renaissance England and The Swerve, the Sapegno Prize, the Distinguished Humanist Award from the Mellon Foundation, the Wilbur Cross Medal from the Yale University Graduate School, the William Shakespeare Award for Classical Theatre, the Erasmus Institute Prize, two Guggenheim Fellowships, and the Distinguished Teaching Award from the University of California, Berkeley. He was president of the Modern Language Association of America and is a fellow of the American Academy of Arts and Sciences, the American Philosophical Society, and the American Academy of Arts and Letters.
Greenblatt is especially fine on the mechanisms of tyranny, its ecology, so to speak, leaving one deeply moved all over again by Shakespeare’s profound and direct understanding of what it is to be human—which includes, alas, being a tyrant.
— Simon Callow - New York Times Book Review

Rarely have these blood-soaked creatures seemed so recognizably human and so contemporary.
— John Lithgow

Greenblatt shows us not only that Shakespeare’s writings can serve as a brilliant guide to the mess of our current politics but also that he—Greenblatt, that is—is perfectly well able to give us an account of them.
— Los Angeles Review of Books

Shakespeare lived five centuries ago, yet Greenblatt’s book has the feel of a series of urgent and very contemporary dispatches.
— Christian Science Monitor

Mr. Greenblatt breaks with the traditional assumption that Shakespeare must have been an uncritical admirer of monarchy. The Shakespeare that this book reveals is not only able to tell a bad king from a good but willing to raise serious doubts about monarchy as a regime.
— Wall Street Journal

An engaging study of some of the most eloquent despots on stage.
— Guardian

In Tyrant, Greenblatt demonstrates the enduring relevance of Shakespeare’s outlook as much as providing a commentary…Shakespeare’s voice rings down the ages, and, as with innumerable other human matters, we would do well to listen to it.

[Tyrant] is valuable less for what it has to say about Shakespeare’s plays than for how it applies the wisdom it has acquired through careful study of these works to the crisis roiling American democracy.

Shakespeare’s fascination with the tyrannical impulse, in domestic as well as political settings, is undeniable and is acutely observed by Greenblatt. The overlap between the private and public spheres is always catastrophic, as is the tyrant’s blind, psychotic fury at resistance when pure obedience is expected, an emotion the plays release and explore compulsively.
— Literary Review (UK)