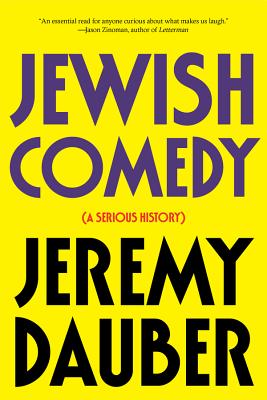 In a major work of scholarship that explores the funny side of some very serious business (and vice versa), Jeremy Dauber examines the origins of Jewish comedy and its development from biblical times to the age of Twitter. Organizing Jewish comedy into “seven strands”—including the satirical, the witty, and the vulgar—he traces the ways Jewish comedy has mirrored, and sometimes even shaped, the course of Jewish history. Dauber also explores the classic works of such masters of Jewish comedy as Sholem Aleichem, Isaac Babel, Franz Kafka, the Marx Brothers, Woody Allen, Joan Rivers, Philip Roth, Mel Brooks, Sarah Silverman, Jon Stewart, and Larry David, among many others.

Jeremy Dauber is a professor of Jewish literature and American studies at Columbia University. He is the author of Jewish Comedy and The Worlds of Sholem Aleichem, both finalists for the National Jewish Book Award. He lives in New York City.
A brilliant and groundbreaking book.
— Adam Kirsch, author of The People and the Books

A serious study, and most interesting at its most serious and obscure.
— Cathleen Schine - New York Review of Books

Both erudite and breezy.… Dauber’s breadth left me breathless and his depth left me in his debt.
— Adam Rovner - Forward

A serious and good philosophical work… that doesn’t consist entirely of jokes but has an awful lot of them in it.… Some of its jokes are laugh-out-loud funny, and some of them are poignantly beautiful.
— David Baddiel - Times Literary Supplement

A comprehensive, accessible treatment of a complex subject. As the famous 1960s ad campaign for Levy’s rye bread told us, you don’t have to be Jewish to enjoy it.
— Harvey Freedenberg - BookPage

Hugely smart and hugely readable.… Here is a serious book full of the reasons Jewish humor is as funny and influential as it is, whether it’s a response to persecution or a social satire or intellectual or raunchy or ironic or folksy.
— Jeff Simon - Buffalo News

This book is brilliant, endlessly revelatory, and Jeremy Dauber is that rare scholar and critic of real depth who doesn’t just make his subject accessible but animates it with the strength of his prose. He’s also one of the few writers I’ve encountered who can explain a joke without killing it. Bravo.
— Sam Lipsyte, author of The Fun Parts