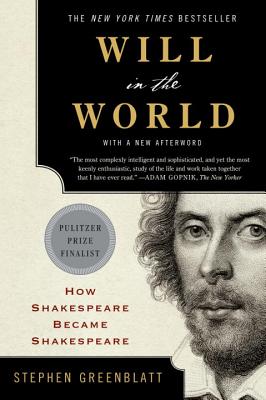 Named One of Esquire's 50 Best Biographies of All Time

The Pulitzer Prize and National Book Award finalist, reissued with a new afterword for the 400th anniversary of Shakespeare’s death.

A young man from a small provincial town moves to London in the late 1580s and, in a remarkably short time, becomes the greatest playwright not of his age alone but of all time. How is an achievement of this magnitude to be explained? Stephen Greenblatt brings us down to earth to see, hear, and feel how an acutely sensitive and talented boy, surrounded by the rich tapestry of Elizabethan life, could have become the world’s greatest playwright.

Stephen Greenblatt (Ph.D. Yale) is Cogan University Professor of the Humanities at Harvard University. Also General Editor of The Norton Anthology of English Literature, he is the author of eleven books, including Tyrant, The Rise and Fall of Adam and Eve: The Story that Created Us, The Swerve: How the World Became Modern (winner of the 2011 National Book Award and the 2012 Pulitzer Prize); Shakespeare's Freedom; Will in the World: How Shakespeare Became Shakespeare; Hamlet in Purgatory; Marvelous Possessions: The Wonder of the New World; Learning to Curse: Essays in Early Modern Culture; and Renaissance Self-Fashioning: From More to Shakespeare. He has edited seven collections of criticism, including Cultural Mobility: A Manifesto, and is a founding coeditor of the journal Representations. His honors include the MLA’s James Russell Lowell Prize, for both Shakespearean Negotiations: The Circulation of Social Energy in Renaissance England and The Swerve, the Sapegno Prize, the Distinguished Humanist Award from the Mellon Foundation, the Wilbur Cross Medal from the Yale University Graduate School, the William Shakespeare Award for Classical Theatre, the Erasmus Institute Prize, two Guggenheim Fellowships, and the Distinguished Teaching Award from the University of California, Berkeley. He was president of the Modern Language Association of America and is a fellow of the American Academy of Arts and Sciences, the American Philosophical Society, and the American Academy of Arts and Letters.
A magnificent achievement.
— Denis Donoghue - Wall Street Journal

Vividly written, richly detailed, and insightful from first chapter to last…certain to secure a place among the essential studies of the greatest of all writers.
— William E. Cain - Boston Sunday Globe

Greenblatt’s masterful biography is like traveling back in time to see firsthand how a small-town Englishman became the greatest writer of all time.
— Adam Morgan - Esquire

So engrossing, clearheaded, and lucid that its arrival is not just welcome but cause for celebration.
— Dan Cryer - Newsday