The Chimp and the River: How AIDS Emerged from an African Forest (Paperback) 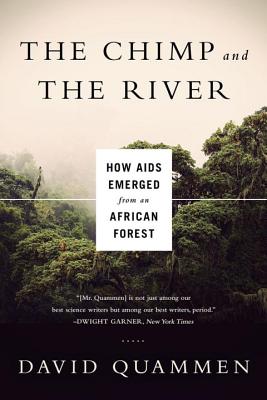 The Chimp and the River: How AIDS Emerged from an African Forest (Paperback)

In this "frightening and fascinating masterpiece" (Walter Isaacson), David Quammen explores the true origins of HIV/AIDS.

The real story of AIDS—how it originated with a virus in a chimpanzee, jumped to one human, and then infected more than 60 million people—is very different from what most of us think we know. Recent research has revealed dark surprises and yielded a radically new scenario of how AIDS began and spread. Excerpted and adapted from the book Spillover, with a new introduction by the author, Quammen's hair-raising investigation tracks the virus from chimp populations in the jungles of southeastern Cameroon to laboratories across the globe, as he unravels the mysteries of when, where, and under what circumstances such a consequential "spillover" can happen. An audacious search for answers amid more than a century of data, The Chimp and the River tells the haunting tale of one of the most devastating pandemics of our time.

David Quammen is the author of The Song of the Dodo, among other books. He has been honored with the John Burroughs Medal for nature writing, an Academy Award in Literature from the American Academy of Arts and Letters, an award in the art of the essay from PEN, and (three times) the National Magazine Award. Quammen is also a contributing writer for National Geographic. He lives in Bozeman, Montana.
Compelling…[an] utterly gripping story.
— Abigail Zuger - The New York Times

[An] intense study of the origins of AIDS. With Sherlockian verve… Quammen’s portrait of the real ‘Patient Zero’… is a masterful summing-up of the evidence.
— Nathan Wolfe - Nature