World in the Balance: The Historic Quest for an Absolute System of Measurement (Paperback) 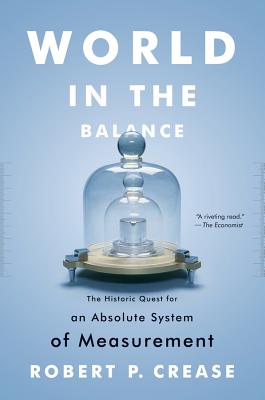 World in the Balance: The Historic Quest for an Absolute System of Measurement (Paperback)

“Shows that the story of metrology . . . can in the right hands make for a riveting read.”—The Economist

Millions of transactions each day depend on a reliable network of weights and measures. But achieving such a network was anything but easy, as Robert P. Crease, physicist and philosopher, demonstrates in this endlessly fascinating, always entertaining look at just how this international system evolved. From the link between musical pitch and distance in the dynasties of ancient China and the use of figurines to measure gold in West Africa to the creation of the French metric and British imperial systems, Crease takes readers along on one of history’s greatest philosophical and scientific adventures.

Robert P. Crease is the chairman of the philosophy department at Stony Brook University and the author of several books on science, including The Quantum Moment and The Great Equations. He lives in New York City.
By any measure, this book is a delight.
— Natural History

Takes the seemingly mundane questions we unthinkingly ask dozens of times a day and reveals them to be thrillingly profound.
— Richard Panek, author of The 4% Universe