Physics for Future Presidents: The Science Behind the Headlines (Paperback) 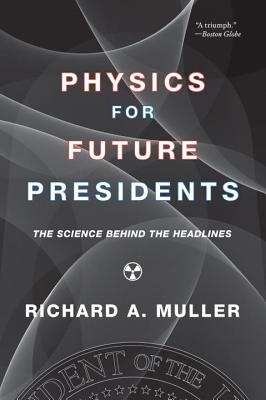 Physics for Future Presidents: The Science Behind the Headlines (Paperback)

By Richard A. Muller

We live in complicated, dangerous times. Present and future presidents need to know if North Korea's nascent nuclear capability is a genuine threat to the West, if biochemical weapons are likely to be developed by terrorists, if there are viable alternatives to fossil fuels that should be nurtured and supported by the government, if private companies should be allowed to lead the way on space exploration, and what the actual facts are about the worsening threats from climate change. This is "must-have" information for all presidents—and citizens—of the twenty-first century.

Winner of the 2009 Northern California Book Award for General Nonfiction.

Richard A. Muller is professor of physics at the University of California, Berkeley, and the best-selling author of Physics for Future Presidents. For his outstanding work in experimental cosmology, he was awarded a 1982 MacArthur “Genius” Fellowship, and also a share of the 2015 Breakthrough Prize in Fundamental Physics for the discovery of dark energy.
A marvelously readable and level-headed explanation of basic science and how it relates to the issues.
— John Tierney - New York Times