Carnage and Culture: Landmark Battles in the Rise to Western Power (Paperback) 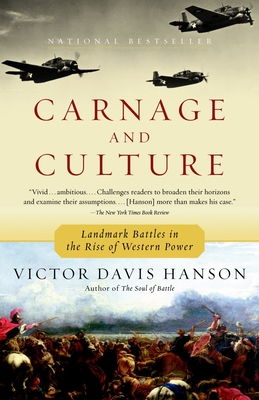 Carnage and Culture: Landmark Battles in the Rise to Western Power (Paperback)


Special Order—Subject to Availability
Examining nine landmark battles from ancient to modern times--from Salamis, where outnumbered Greeks devastated the slave army of Xerxes, to Cortes’s conquest of Mexico to the Tet offensive--Victor Davis Hanson explains why the armies of the West have been the most lethal and effective of any fighting forces in the world.

Looking beyond popular explanations such as geography or superior technology, Hanson argues that it is in fact Western culture and values–the tradition of dissent, the value placed on inventiveness and adaptation, the concept of citizenship–which have consistently produced superior arms and soldiers. Offering riveting battle narratives and a balanced perspective that avoids simple triumphalism, Carnage and Culture demonstrates how armies cannot be separated from the cultures that produce them and explains why an army produced by a free culture will always have the advantage.
Victor Davis Hanson is the Martin and Illie Anderson Senior Fellow in Residence in Classics and Military History at the Hoover Institution, Stanford University, a professor of Classics Emeritus at California State University, Fresno, and a nationally syndicated columnist for Tribune Media Services. He is also the Wayne & Marcia Buske Distinguished Fellow in History, Hillsdale College, where he teaches each fall semester courses in military history and classical culture. He is the author of The Soul of Battle, An Autumn of War, and Ripples of Battle, all published by Anchor Books. His most recent book is The Savior Generals (Bloomsbury 2013). Hanson was awarded the National Humanities Medal in 2007, the Bradley Prize in 2008, as well as the William F. Buckley Prize (2015), the Claremont Institute’s Statesmanship Award (2006), and the Eric Breindel Award for opinion journalism (2002). He divides his time between his farm in Selma, CA, where he was born in 1953, and the Stanford campus.
“Vivid . . . ambitious . . . Challenges readers to broaden their horizons and examine their assumptions. . . . [Hanson] more than makes his case.”--The New York Times Book Review

“No one offers a more compelling picture of how wars reflect and affect the societies, including our own, that wage them.” —National Review

“Hanson . . . is becoming one of the best-known historians in America . . . [Carnage and Culture] can only enhance his reputation.” —John Keegan, Daily Telegraph (London)

“Victor Davis Hanson is courting controversy again with another highly readable, lucid work. Together with John Keegan, he is our most interesting historian of war.” —Jean Bethke Elshtain, author of Women and War