Permanent Astonishment: Growing Up Cree in the Land of Snow and Sky (Paperback) 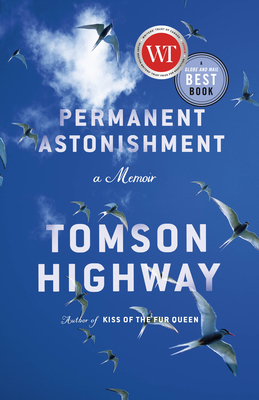 Permanent Astonishment: Growing Up Cree in the Land of Snow and Sky (Paperback)


Special Order—Subject to Availability
WINNER OF THE HILARY WESTON WRITERS' TRUST PRIZE FOR NONFICTION * NOMINATED FOR THE EVERGREEN AWARD * NAMED A BEST BOOK OF THE YEAR BY THE GLOBE AND MAIL, WINNIPEG FREE PRESS, AND CBC Capricious, big-hearted, joyful: an epic memoir from one of Canada's most acclaimed Indigenous writers and performers Tomson Highway was born in a snowbank on an island in the sub-Arctic, the eleventh of twelve children in a nomadic, caribou-hunting Cree family. Growing up in a land of ten thousand lakes and islands, Tomson relished being pulled by dogsled beneath a night sky alive with stars, sucking the juices from roasted muskrat tails, and singing country music songs with his impossibly beautiful older sister and her teenaged friends. Surrounded by the love of his family and the vast, mesmerizing landscape they called home, his was in many ways an idyllic far-north childhood. But five of Tomson's siblings died in childhood, and Balazee and Joe Highway, who loved their surviving children profoundly, wanted their two youngest sons, Tomson and Rene, to enjoy opportunities as big as the world. And so when Tomson was six, he was flown south by float plane to attend a residential school. A year later Rene joined him to begin the rest of their education. In 1990 Rene Highway, a world-renowned dancer, died of an AIDS-related illness.
Permanent Astonishment is Tomson's extravagant embrace of his younger brother's final words: Don't mourn me, be joyful. His memoir offers insights, both hilarious and profound, into the Cree experience of culture, conquest, and survival.
TOMSON HIGHWAY is best known for his Governor General's Award-nominated plays The Rez Sisters and Dry Lips Oughta Move to Kapuskasing, as well as the bestselling novel Kiss of the Fur Queen. He divides his year between Gatineau, Quebec and Northern Ontario.