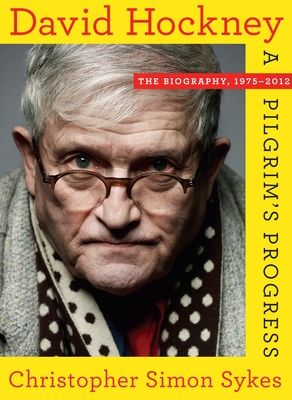 In this fascinating and entertaining second volume, Christopher Simon Sykes explores the life and work of Britain's most popular living artist.

David Hockney is one of the most influential and best-loved artists of the twentieth century. His career has spanned and epitomized the art movements of the past five decades. Picking up Hockney's story in 1975, this book finds him flitting between Notting Hill and California, where he took inspiration for the swimming pool series of paintings; creating acclaimed set designs for operas around the world; and embracing emerging technologies—the Polaroid camera and fax machine in the seventies and eighties and, most recently, the iPad. Hockney's boundless energy extends to his personal life too, and this volume illuminates the glamorous circles he moves in, as well as his sometimes turbulent relationships.

Christopher Simon Sykes has been granted exclusive and unprecedented access to Hockney's paintings, notebooks, and diaries, and a great number of them are reproduced here. Featuring interviews with family, friends, and Hockney himself, this is a lively and revelatory account of an acclaimed artist and an extraordinary man.

CHRISTOPHER SIMON SYKES is a photographer and writer. He specializes in architectural and garden photography and writes on architecture and social history. Sykes worked with Eric Clapton on his autobiography, Clapton, and his work has appeared in publications such as Vogue, Vanity Fair, Town & Country, and Architectural Digest. He lives with his wife and daughter in North London.

"The Hockney who emerges from Sykes’s biography is far from an average artist. Relentlessly curious, ambitious and irreverent, he never rests on any laurels nor stays in one place for very long."
—Washington Post

"Chapter by chapter, the book unfolds as a series of love affairs, in which the workaholic artist falls madly in love with a new art-making medium — fax machines, Polaroids and iPads, to name a few — puzzles over its problems and potential, masters it and moves on ... Sykes has an engaging style and an enviable ability to write clearly about art."
—Associated Press

"Drawing on interviews with Hockney, his siblings, and colleagues; Hockey's autobiography; and diaries of famous friends, such as Christopher Isherwood and Stephen Spender, Sykes matches his subject's ebullience in this admiring, well-researched life."
—Kirkus Reviews

"Sykes continues his meticulously detailed, multivolume biography of the ever-replenishing font of creativity that is artist David Hockney ... Sykes articulates all the verve, ingenuity, and complex struggles involved in the protean Hockney’s deep inquiry into the nature of perception while also illuminating his influences, from his 'great hero,' Picasso, to Ingres, Thomas Moran, and Chinese scrolls, and recounting his eager embrace of new technologies and the resultant complex photo collages, sumptuous iPad drawings, and stunning, high definition videos."
—Booklist