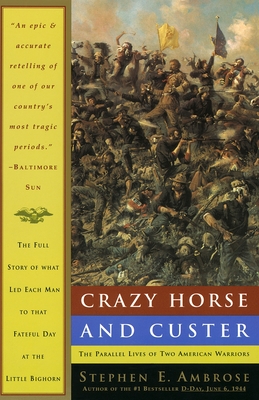 
Backordered
The full story of what led Crazy Horse and Custer to that fateful day at the Little Bighorn, from bestselling historian Stephen E. Ambrose.

On the sparkling morning of June 25, 1876, 611  U.S. Army soldiers rode toward the banks of the Little Bighorn in the Montana Territory, where 3,000 Indians stood waiting for battle.  The lives of two great warriors would soon be forever linked throughout history: Crazy Horse, leader of the Oglala Sioux, and General George Armstrong Custer of the Seventh Cavalry. Both were men of aggression and supreme courage. Both had become leaders in their societies at very early ages; both had been stripped of power, and in disgrace had worked to earn back the respect of their people. And to both of them, the unspoiled grandeur of the Great Plains of North America was an irresistible challenge. Their parallel lives would pave the way, in a manner unknown to either, for an inevitable clash between two nations fighting for possession of the open prairie.

Stephen E. Ambrose was the author or co-author of more than thirty books on military affairs and foreign policy. Early in his career he was an associate editor of The Eisenhower Papers, and he later went on to publish the definitive, three-part biography of Eisenhower, as well as many bestselling books of military history, including Band of Brothers and Undaunted Courage. He died in 2002.

"Movingly told and well written . . . a fine  contribution, one that will be read with pleasure and  admiration by general reader, student and scholar  alike. Ambrose has breathed new life into the  familiar facts."--Library  Journal

"An epic and accurate retelling  of one of our country's most tragic  periods."--Baltimore Sun