The Art of the Personal Essay: An Anthology from the Classical Era to the Present (Paperback) 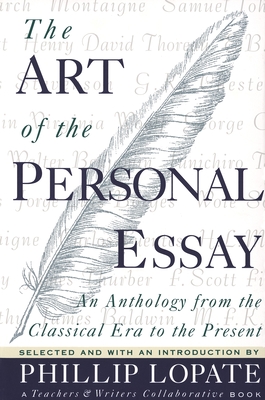 The Art of the Personal Essay: An Anthology from the Classical Era to the Present (Paperback)


On Our Shelves Now at:
For more than four hundred years, the personal  essay has been one of the richest and most vibrant  of all literary forms. Distinguished from the  detached formal essay by its friendly, conversational  tone, its loose structure, and its drive toward  candor and self-disclosure, the personal essay  seizes on the minutiae of daily life-vanities,  fashions, foibles, oddballs, seasonal rituals, love and  disappointment, the pleasures of solitude,  reading, taking a walk -- to offer insight into the  human condition and the great social and political  issues of the day. The Art of the Personal Essay is  the first anthology to celebrate this fertile  genre. By presenting more than seventy-five personal  essays, including influential forerunners from  ancient Greece, Rome, and the Far East,  masterpieces from the dawn of the personal essay in the  sixteenth century, and a wealth of the finest  personal essays from the last four centuries, editor  Phillip Lopate, himself an acclaimed essayist,  displays the tradition of the personal essay in all  its historical grandeur, depth, and  diversity.
Philip Lopate is the author of Against Joie de Vivre, Bachelorhood, The Rug Merchant, Being with Children, and Confessions of Summer. A recipient of Guggenheim and National Endowment for the Arts fellowships, his works have appeared in Best American Essays, The Paris Review, Pushcart Prize annuals, and many other publications. He lives in Brooklyn, New York, and is Adams Professor of English at Hofstra University.
"A wonderful book. The most charming smorgasbord  imaginable of essays from around the world."  -- Diane Cole, USA Today.

"Without a doubt, this is the most  nourishing essay collection I've read in years."  -- Susan Burmeister-Brown, Portland  Oregonian.

"A labor of deeply  felt love and keenly honed scholarship by an  essay authority who knows his territory down to his  bones." -- Christian Science  Monitor.

"The best available [essay  anthology] no matter how crowded the field."  -- Chicago Tribune.

"The striking thing is how much Lopate has managed  to pack in, and how high a standard he has  managed to maintain." -- John Gross, New  York Newsday.

"Packed with  personality and beguiling first-person prose... of  reminders of the perils and pleasures of the  craft." -- The Wall Street  Journal.