Mistakes That Worked: 40 Familiar Inventions & How They Came to Be (Paperback) 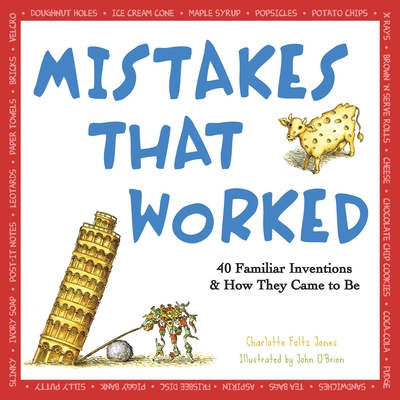 Mistakes That Worked: 40 Familiar Inventions & How They Came to Be (Paperback)

The greatest discoveries are made outside the classroom! Learn all about mistakes that changed the world with this collection of the strange stories behind everyday inventions! It's no accident that you'll love this book!

SANDWICHES came about when an English earl was too busy gambling to eat his meal and needed to keep one hand free. POTATO CHIPS were first cooked by a chef who was furious when a customer complained that his fried potatoes weren’t thin enough. Coca-Cola, Silly Putty, and X rays have fascinating stories behind them too! Their unusual tales, and many more, along with hilarious cartoons and weird, amazing facts, make up this fun-filled book about everyday items that had surprisingly haphazard beginnings.

And don't miss Eat Your Words about the fascinating language of food!

“A splendid book that is as informative as it is entertaining . . . a gem.” —Booklist, Starred Review

CHARLOTTE FOLTZ JONES was an author of award-winning nonfiction books for children, as well as numerous magazine articles.

JOHN O'BRIEN is a frequent contributor to the New Yorker magazine and has illustrated many popular children's books.
"A splendid book that is as informative as it is entertaining. Jones has great fun with facts, dredging up plenty in a lively, anecdotal account that recollects the oddball origins of a variety of foods, clothing, toys, and devices....A gem of a book."--Booklist, starred review