The Social Construction of Reality: A Treatise in the Sociology of Knowledge (Paperback) 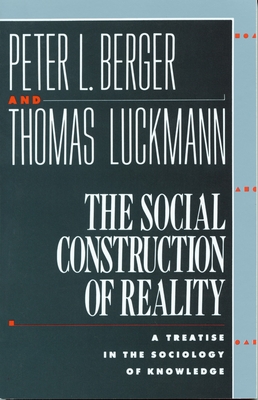 The Social Construction of Reality: A Treatise in the Sociology of Knowledge (Paperback)


Backordered
Called the "fifth-most important sociological book of the 20th century" by the International Sociological Association, this groundbreaking study of knowledge introduces the concept of "social construction" into the social sciences for the first time. In it, Berger and Luckmann reformulate the task of the sociological subdicipline that, since Max Scheler, has been known as the sociology of knowledge.
PETER L. BERGER is University Professor and Director of the Institute for the Study of Economic Culture at Boston University. He is the author of, among other books, Invitation to Sociology, The Sacred Canopy, and The Capitalist Revolution.

THOMAS LUCKMANN is Professor of Sociology at the University of Konstanz (West Germany). He is the author of, among other books, The Invisible Religion and (with Alfred Schutz) Structures of the Life-World.

"... A major breakthrough in the  sociology of knowledge." -- American  Sociological Review.