Amelia Lost: The Life and Disappearance of Amelia Earhart (Hardcover) 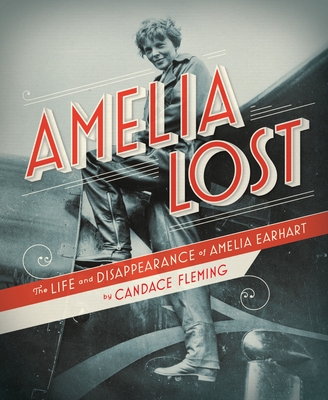 Amelia Lost: The Life and Disappearance of Amelia Earhart (Hardcover)


Not On Our Shelves—Ships in 1-5 Days
From the acclaimed author of The Great and Only Barnum—as well as The Lincolns, Our Eleanor, and Ben Franklin's Almanac—comes the thrilling story of America's most celebrated flyer, Amelia Earhart.

In alternating chapters, Fleming deftly moves readers back and forth between Amelia's life (from childhood up until her last flight) and the exhaustive search for her and her missing plane. With incredible photos, maps, and handwritten notes from Amelia herself—plus informative sidebars tackling everything from the history of flight to what Amelia liked to eat while flying (tomato soup)—this unique nonfiction title is tailor-made for middle graders.

Amelia Lost received four starred reviews and Best Book of the Year accolades from School Library Journal, Kirkus Reviews, Horn Book Magazine, the Washington Post, and the New York Times.
CANDACE FLEMING is the prolific author of The Great and Only Barnum, a YALSA Award for Excellence in Nonfiction nominee and a Publishers Weekly and Booklist Best Book; The Lincolns: A Scrapbook Look at Abraham and Mary, a Boston Globe-Horn Book Award recipient; Our Eleanor, an ALA Best Book for Young Adult's; and Ben Franklin's Almanac, a James Madison Honor Book. She is also the author of many highly acclaimed picture books.

Starred Review, The Horn Book Magazine, March/April 2011:
"The book’s structure and scope, along with the story’s inherent drama, provide a taut, cinematic backdrop for the history of Earhart’s doomed flight."

Starred Review, School Library Journal, March 2011:
"Ho-hum history? Not in Fleming’s apt hands. What could be a dry recitation of facts and dates is instead a gripping and suspenseful thriller...This book is splendid. Hand it to everyone."

Starred Review, The Bulletin of the Center for Children's Books, March 2011:
"Fleming cleverly structures this biography to give the tale of tragedy a fresh and dreadful impact...As a result, this offers not only a provocative introduction to Earhart but also compelling glimpse of what it was like to watch her disappear from the world."