What Is Given from the Heart (Hardcover) 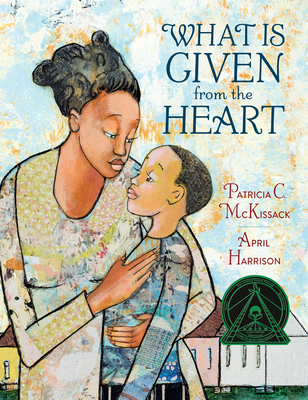 What Is Given from the Heart (Hardcover)

This final, magnificent picture book from three-time Coretta Scott King Award winner and Newbery Honor author Patricia McKissack is a poignant and uplifting celebration of the joy of giving.

"Misery loves company,"" Mama says to James Otis. It's been a rough couple of months for them, but Mama says as long as they have their health and strength, they're blessed. One Sunday before Valentine's Day, Reverend Dennis makes an announcement during the service-- the Temples have lost everything in a fire, and the church is collecting anything that might be useful to them. James thinks hard about what he can add to the Temple's ""love box,"" but what does he have worth giving? With her extraordinary gift for storytelling, McKissack--with stunning illustrations by Harrison--delivers a touching, powerful tale of compassion and reminds us all that what is given from the heart, reaches the heart.
PATRICIA C. MCKISSACK is the author of many lauded books for children, including, most recently, Let's Clap, Jump, Sing & Shout, a 2017 Parents Choice Gold Award winner, a New York Public Library, School Library Journal, and Kirkus Reviews Best Book of the Year, and recipient of 3 starred reviews; The Dark-Thirty: Southern Tales of the Supernatural, a Newbery Honor Book and Coretta Scott King Award winner, and its companion, Porch Lies: Tales of Slicksters, Tricksters, and other Wily Characters, an ALA-ALSC Notable Children's Book; Never Forgotten, a Corretta Scott King Honor book; and The All-I'll-Ever-Want Christmas Doll, an ALA-ALSC Notable Children's Book and winner of the 2008 Parents Choice Award. Ms. McKissack passed away in the summer of 2017. This is her final work.

"A sweet story, one of the legendary McKissack's last, enhanced by delectable art from a prodigious new talent."—Kirkus Reviews, starred review

"What Is Given from the Heart is a loving tribute to collective work, responsibility and the joy that comes from giving freely from the heart."—Shelf Awareness, starred review

"A treasure from a marvelous storyteller."—School Library Journal, starred review

“[An] exquisite story of generosity from the beloved McKissack… Harrison has created soft yet dazzling illustrations for this tribute to faith, hope and the African-American community.” —New York Times Book Review