The Hound of the Baskervilles, A Study in Scarlet, The Sign of Four: Introduction by Andrew Lycett (Everyman's Library Classics Series) (Hardcover) 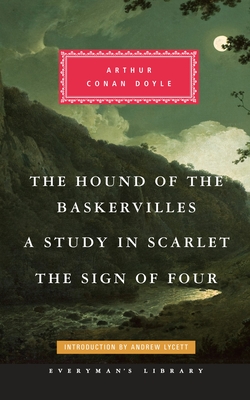 The Hound of the Baskervilles, A Study in Scarlet, The Sign of Four: Introduction by Andrew Lycett (Everyman's Library Classics Series) (Hardcover)


Not On Our Shelves—Ships in 1-5 Days
Three of the enthralling novels that brought us the world’s greatest fictional detective are gathered here in one volume.

In 1887, Sir Arthur Conan Doyle’s mystery novel A Study in Scarlet unleashed for the first time the unflappable Sherlock Holmes and his partner, Dr. John Watson. Watson and Holmes would go on to become two of the most widely admired characters in all of literature. The stories and novels that followed—including The Sign of Four and The Hound of the Baskervilles—expanded the duo’s practice at 221B Baker Street, thrilling readers with the impeccable powers of deduction that inevitably guide Holmes toward any mystery’s solution.

A Study in Scarlet, a tale of Mormons and murder, is a drama of long-simmering revenge that plays out on the gaslit streets of London but has its dark roots in the pioneer settlements of Utah. The Sign of Four weaves together a stolen treasure from India, poison darts, and double-crossing thieves, while The Hound of the Baskervilles sets the legend of a diabolical hellhound and an old family curse against the backdrop of a desolate, moonlit moor. All three novels are gripping, timeless, and exquisitely plotted—beloved and indispensable classics of the detective genre.
ARTHUR CONAN DOYLE was born in Edinburgh, Scotland, in 1859. A Study in Scarlet, his first novel and Sherlock Holmes story, was published in Beeton's Christmas Annual in 1887. He was the author of more than fifty novels, ranging in genre from science fiction to historical fiction. He died in 1930.