Crucible of War: The Seven Years' War and the Fate of Empire in British North America, 1754-1766 (Paperback) 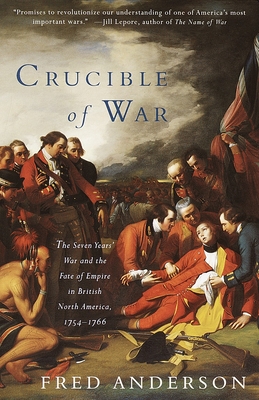 Crucible of War: The Seven Years' War and the Fate of Empire in British North America, 1754-1766 (Paperback)


Not On Our Shelves—Ships in 1-5 Days
In this vivid and compelling narrative, the Seven Years' War–long seen as a mere backdrop to the American Revolution–takes on a whole new significance. Relating the history of the war as it developed, Anderson shows how the complex array of forces brought into conflict helped both to create Britain’s empire and to sow the seeds of its eventual dissolution.

Beginning with a skirmish in the Pennsylvania backcountry involving an inexperienced George Washington, the Iroquois chief Tanaghrisson, and the ill-fated French emissary Jumonville, Anderson reveals a chain of events that would lead to world conflagration. Weaving together the military, economic, and political motives of the participants with unforgettable portraits of Washington, William Pitt, Montcalm, and many others, Anderson brings a fresh perspective to one of America’s most important wars, demonstrating how the forces unleashed there would irrevocably change the politics of empire in North America.
Fred Anderson is Associate Professor of History at the University of Colorado, Boulder. He is the author of A People's Army: Massachusetts Soldiers and Society in the Seven Years' War (1984), as well as many articles, essays, and reviews.
"Vivid and memorable…eventful and fast-paced."–The New York Times Book Review