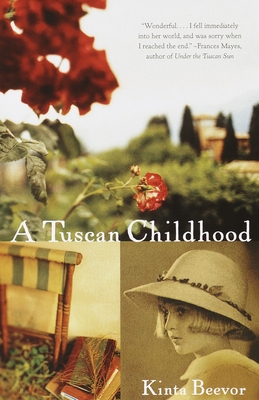 
Special Order—Subject to Availability
The sparkling memoir of an idyllic, bohemian childhood in an enchanted Tuscan castle between World War I and World War II.

When Kinta Beeevor was five, her father, the painter Aubrey Waterfield, bought the sixteenth-century Fortezza della Brunella in the Tuscan village of Aulla. There her parents were part of a vibrant artistic community that included Aldous Huxley, Bernard Berenson, and D. H. Lawrence. Meanwhile, Kinta and her brother explored the glorious countryside, participated in the region's many seasonal rites and rituals, and came to know and love the charming, resilient Italian people. With the coming of World War II the family had to leave Aulla; years later, though, Kinta would return to witness the courage and skill of the Tuscan people as they rebuilt their lives. Lyrical and witty, A Tuscan Childhood is alive with the timeless splendour of Italy.
Kinta Beevor was born in 1911 in Northbourne, England, and died in 1995. Born Carinthia Waterfield, she was the daughter of Aubrey Waterfield, a painter, and Lina Waterfield (granddaughter of Lucie Duff Gordon, who wrote the Victorian best-seller Letters from Egypt in 1865). From the age of five and until she was sent to boarding school in England, Kinta was raised in the Fortezza della Brunella in northern Tuscany, an inhospitable castle on a rock with views of the Carraras. In 1993, at the age of 82, she published A Tuscan Childhood, the story of her youth in Italy.
"Wonderful...I fell immediately into her world, and was sorry when I reached the end." --Frances Mayes, author of Under the Tuscan Sun

"Packed with sumptuous descriptions of seasons and their rites--. A portrait of a vanished Tuscany and a tantalizing glimpse of exceptional people who loved Italy very well."--Elle

"A loving and intimate portrait of Tuscany's many faces--. One can hear the buzzing of the cicadas, smell the wild thyme, and feel the crunching of pine needles underfoot--. A beautifully written book."--The Sunday Times (London)

"Captivating--sharp-eyed, intelligent and abundant in its riches. "--Los Angeles Times