Three Uses of the Knife: On the Nature and Purpose of Drama (Paperback) 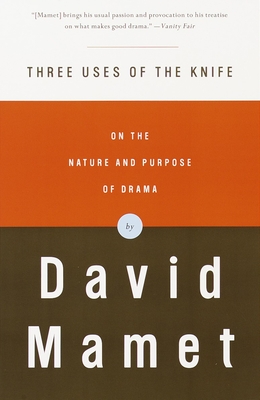 Three Uses of the Knife: On the Nature and Purpose of Drama (Paperback)

The purpose of theater, like magic, like religion . . . is to inspire cleansing awe. What makes good drama? And why does drama matter in an age that is awash in information and entertainment? David Mamet, one of our greatest living playwrights, tackles these questions with bracing directness and aphoristic authority. He believes that the tendency to dramatize is essential to human nature, that we create drama out of everything from today’s weather to next year’s elections. But the highest expression of this drive remains the theater.
With a cultural range that encompasses Shakespeare, Bretcht, and Ibsen, Death of a Salesman and Bad Day at Black Rock, Mamet shows us how to distinguish true drama from its false variants. He considers the impossibly difficult progression between one act and the next and the mysterious function of the soliloquy. The result, in Three Uses of the Knife, is an electrifying treatise on the playwright’s art that is also a strikingly original work of moral and aesthetic philosophy.

David Mamet is a Pulitzer Prize-winning playwright and an Academy Award-nominated screenwriter, as well as a director, novelist, poet, and essayist. He has written the screenplays for more than twenty films, including Heist, Spartan, House of Games, The Spanish Prisoner, The Winslow Boy, Wag the Dog, and the Oscar-nominated The Verdict. His more than twenty plays include Oleanna, The Cryptogram, Speed-the-Plow, American Buffalo, Sexual Perversity in Chicago, and the Pulitzer Prizewinning Glengarry Glen Ross. Born in Chicago in 1947, Mamet has taught at the Yale School of Drama, New York University, and Goddard College, and is a founding member of the Atlantic Theater Company.
"[Mamet] brings his usual passion and provocation to his treatise on what makes good drama." --Vanity Fair

"No modern playwright has been bolder or more brilliant." --The New Yorker

"David Mamet adds yet another segment to a body of work that puts him among the great writers of this, or any other, time." --Joe Mantegna