Eating to Extinction: The World's Rarest Foods and Why We Need to Save Them (Hardcover) 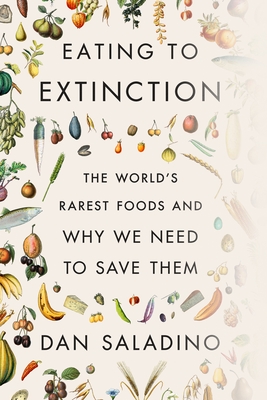 Eating to Extinction: The World's Rarest Foods and Why We Need to Save Them (Hardcover)

What Saladino finds in his adventures are people with soul-deep relationships to their food. This is not the decadence or the preciousness we might associate with a word like “foodie,” but a form of reverence . . . Enchanting." —Molly Young, The New York Times

Over the past several decades, globalization has homogenized what we eat, and done so ruthlessly. The numbers are stark: Of the roughly six thousand different plants once consumed by human beings, only nine remain major staples today. Just three of these—rice, wheat, and corn—now provide fifty percent of all our calories. Dig deeper and the trends are more worrisome still:

The source of much of the world’s food—seeds—is mostly in the control of just four corporations. Ninety-five percent of milk consumed in the United States comes from a single breed of cow. Half of all the world’s cheese is made with bacteria or enzymes made by one company. And one in four beers drunk around the world is the product of one brewer.

If it strikes you that everything is starting to taste the same wherever you are in the world, you’re by no means alone. This matters: when we lose diversity and foods become endangered, we not only risk the loss of traditional foodways, but also of flavors, smells, and textures that may never be experienced again. And the consolidation of our food has other steep costs, including a lack of resilience in the face of climate change, pests, and parasites. Our food monoculture is a threat to our health—and to the planet.

In Eating to Extinction, the distinguished BBC food journalist Dan Saladino travels the world to experience and document our most at-risk foods before it’s too late. He tells the fascinating stories of the people who continue to cultivate, forage, hunt, cook, and consume what the rest of us have forgotten or didn’t even know existed. Take honey—not the familiar product sold in plastic bottles, but the wild honey gathered by the Hadza people of East Africa, whose diet consists of eight hundred different plants and animals and who communicate with birds in order to locate bees’ nests. Or consider murnong—once the staple food of Aboriginal Australians, this small root vegetable with the sweet taste of coconut is undergoing a revival after nearly being driven to extinction. And in Sierra Leone, there are just a few surviving stenophylla trees, a plant species now considered crucial to the future of coffee.

From an Indigenous American chef refining precolonial recipes to farmers tending Geechee red peas on the Sea Islands of Georgia, the individuals profiled in Eating to Extinction are essential guides to treasured foods that have endured in the face of rampant sameness and standardization. They also provide a roadmap to a food system that is healthier, more robust, and, above all, richer in flavor and meaning.

Dan Saladino is a renowned food journalist who has worked at the BBC for twenty-five years. For more than a decade he has traveled the world recording stories of foods at risk of extinction—from cheeses made in the foothills of a remote Balkan mountain range to unique varieties of rice grown in southern China. His work has been recognized by the James Beard Foundation, the Guild of Food Writers, and the Fortnum & Mason Food and Drink Awards.

"Eating to Extinction is a celebration in the form of eclectic case studies . . . What Saladino finds in his adventures are people with soul-deep relationships to their food. This is not the decadence or the preciousness we might associate with a word like “foodie,” but a form of reverence . . . Enchanting." —Molly Young, The New York Times

"An immensely readable compendium of food history, cultural lore, agricultural science, and travelogue. There are new flavors to imagine and places to visit on every page." —Richard Schiffman, The Christian Science Monitor

"Eating to Extinction tells the stories of dozens of . . . endangered tastes and makes a reasoned case for saving them in which nostalgia and sentimentality play very little part . . . Saladino has an 18-year-old backpacker’s willingness to light out for remote destinations far from the usual food-writer feeding troughs . . . [A] deeply humanist book . . . Saladino’s eye for detail is photographic when he is describing places and things." —Pete Wells, The New York Times Book Review

"[An] impressively researched book . . . Saladino brings his subjects to life, even breaking bread with them as he seeks out these rare and important foods. His evocative descriptions make a culinary case for preserving them." —Hannah Wallace, The Washington Post

"Fascinating . . . A delightful exploration of traditional foods as well as a grim warning that we are farming on borrowed time." —Kirkus Reviews (starred review)

"Into this maelstrom of climate change that all of us are now experiencing, to varying degrees, Saladino . . . brings more bad news, seeded with some good . . . A deeply saddening, too-familiar story containing yet a kernel of hope." —Alan Moores, Booklist (starred review)

“Dan Saladino’s stories of endangered foods form a rallying cry to us all to protect the world’s diversity before it’s too late. But this is also a book filled with optimism; it captures the energy of a global movement of people dedicating their lives to saving the plants, the animals, the flavors, and the food knowledge we must preserve.” —Alice Waters

“This is a big book with a simple message: that we all need to pay more attention to what we are (and are no longer) eating. Behind everything we eat there are people, places, and stories. When we lose diversity in our food, we threaten also the culture and history of the land and the people who produce it. As the world becomes increasingly homogenous, preserving these things—keeping hold of diversity—matters. Dan Saladino manages to highlight the urgency of this matter while also inspiring us to believe that turning the tide is still possible.” —Yotam Ottolenghi

“I’ve long admired Dan Saladino’s journalism for its broad scope and passion. The same qualities animate his first book, Eating to Extinction, an inspiring account of endangered foods and food cultures across the planet. Everyone who cares about what they eat will want to know its stories.” —Harold McGee

"This inspiring and urgent book is one of the few food books that has ever given me goosebumps. Eating to Extinction is a love letter to the huge diversity of foods enjoyed by human beings. A story full of both loss and hope." —Bee Wilson, author of The Wall Street Journal's "Table Talk" column

“Over the course of the handful of millennia we humans have been growing food, Dan Saldino tells us in his incisive book Eating to Extinction, we have foolishly whittled down our original diet from over 6,000 species of plants to just nine. Rice, wheat and corn make up half of our calories. By digging at the roots of this top heavy arrangement Saladino delivers profound truths about our food system while taking the reader on a fabulous journey of taste, texture and provenance.” —Paul Greenberg, bestselling author of the James Beard award-winner Four Fish.

"This is a work of staggering importance. If we relinquish control of the food supply to industrial technology, we lose not only our cultural heritage and good taste, but the ability to feed ourselves in a sustainable, local and meaningful way. Dan Saladino sounds a call to action, not a swan song of bygone foodways, and it should be required reading on the lists of everyone concerned about food." —Ken Albala, professor of history at the University of the Pacific

"Eating to Extinction is an exhaustively researched and fascinating account of endangered food and drink. As a study of biodiversity and cultural creativity its message is alarming yet hopeful." —Paul Freedman, professor at Yale University and author of Ten Restaurants that Changed America