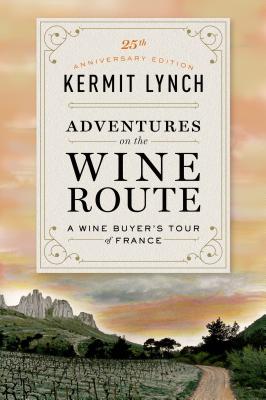 “Wine is, above all, about pleasure. Those who make it ponderous make it dull . . . If you keep an open mind and take each wine on its own terms, there is a world of magic to discover.” So wrote the renowned wine expert Kermit Lynch in the introduction to Adventures on the Wine Route, his ultimate tour of France, especially its wine cellars. The “magic” of wine is Lynch’s subject as he takes the reader on a singular journey through the Loire, Bordeaux, the Languedoc, Provence, northern and southern Rhone, and Burgundy. In Adventures on the Wine Route, the wine lover will find wisdom without a trace of pretension and hype. As Victor Hazan wrote, “In Kermit Lynch’s small, true, delightful book there is more understanding about what wine really is than in everything else I have read.”

Praise for Lynch and for Adventures on the Wine Route has not ceased since the book’s initial publication a quarter century ago. In 2007, the New York Times called it “one of the finest American books on wine.” And in June 2012, The Wall Street Journal proclaimed it “the best book on the wine business.” Full of vivid portraits of French vintners, memorable evocations of the French countryside, and, of course, vibrant descriptions of French wines, this new edition of Adventures on the Wine Route updates a modern classic for our times.

Kermit Lynch was born and raised in California. In 1972, he opened a retail wineshop and later began importing and distributing nationally. In 1988, he published Adventures on the Wine Route, which won the Veuve Clicquot Wine Book of the Year Award. His second book, Inspiring Thirst, was published in 2004. Lynch divides his time between Berkeley and Provence, where he lives with his wife, the photographer Gail Skoff, and their two children.

“One of the pleasantest and truest books about wine I've ever read.” —M. F. K. Fisher

“Kermit's book changed my thinking about wine. Colorful encounters with larger-than-life personalities, the primacy of the land and authenticity, plus a good dose of humorous anecdotes to keep you entertained. This book deserves to stay in print forever!” —Alice Waters

“Adventures on the Wine Route is the best book I've ever read about wine. Kermit Lynch is as brilliant a writer as he is a taster, and his quest for authentic wine is more relevant than ever.” —Jay McInerney

“When one enters a bookstore nowadays and goes to the section reserved for books about wine, one is overwhelmed by how immensely it has grown. In this jungle where obsolescence is rampant, only a very few will become classics. Adventures on the Wine Route is surely one of them--a quarter of a century old and not one wrinkle! The author's prose, his lyrical descriptions, his enthusiasm--not to mention his unique experiences along ‘his' wine route--will delight, instruct, and cast an indelible spell on readers for years to come.” —Aubert and Pamela de Villaine

“I am simply thrilled by it. I am bowled over by his blend of poetry and candour. What heaven-sent common sense.” —Hugh Johnson