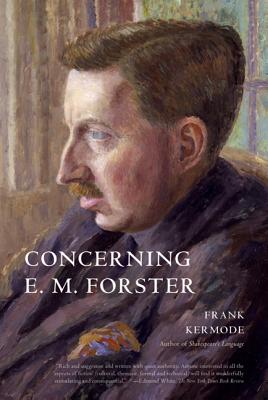 A major reassessment of the great English novelist

This impressive new book by the celebrated British critic Frank Kermode examines hitherto neglected aspects of the novelist E. M. Forster's life and work. Kermode is interested to see how it was that this apparently shy, reclusive man should have claimed and kept such a central position in the English writing of his time, even though for decades he composed no fiction and he was not close to any of his great contemporaries—Henry James, Ford Madox Ford, Joseph Conrad, James Joyce.

Concerning E. M. Forster has at its core the Clark Lectures that Kermode gave at Cambridge University in 2007 on the subject of Forster, eighty years after Forster himself gave those lectures, which became Aspects of the Novel. Kermode reappraised the influence and meaning of that great work, assessed the significance of Forster's profound musicality (Britten thought him the most musical of all writers), and offered a brilliant interpretation of Forster's greatest work, A Passage to India. But there is more to Concerning E. M. Forster than that. Thinking about Forster vis-àvis other great modern writers, noting his interest in Proust and Gide and his lack of curiosity about American fiction, and observing that Forster was closest to the people who shared not his literary interests or artistic vocation but, rather, his homosexuality, Kermode's book offers a wise, original, and persuasive new portrait not just of Forster but of twentieth-century English letters.

Frank Kermode (1919-2010) is the author of many books, including Shakespeare's Language (FSG, 2000), Not Entitled (FSG, 1995), Forms of Attention, and The Sense of an Ending. He taught extensively in the United States, and lived in Cambridge, England.
"Kermode is a delightful mentor for readers wishing to reflect not only on Forster's “creativity but on the personal and social circumstances that restricted it." - Publishers Weekly