Mr. Lincoln Sits for His Portrait: The Story of a Photograph That Became an American Icon (Hardcover) 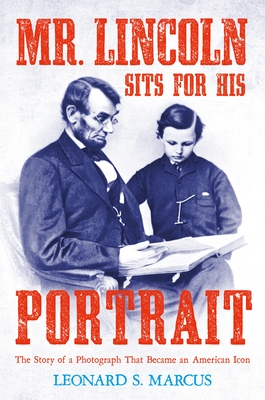 Mr. Lincoln Sits for His Portrait: The Story of a Photograph That Became an American Icon (Hardcover)

A unique middle-grade depiction of America’s sixteenth president, through the story of one famous photograph.

On February 9, 1864, Abraham Lincoln made the mile-long walk from the Executive Mansion to photographer Mathew Brady's Washington, DC, studio, to be joined there later by his ten-year-old son, Tad. With a fractious re-election campaign looming that year, America's first media-savvy president was intent on securing another portrait that cast him in a favorable light, as he prepared to make the case for himself to a nation weary of war. At least four iconic pictures were made that day. One was Lincoln in profile, the image that later found its way onto the penny; two more would be adapted for the 1928 and 2008 five-dollar bills. The fourth was a dual portrait of Lincoln and Tad. The pose, featuring Lincoln reading to his son, was a last-minute improvisation, but the image that came of it was—and remains—incomparably tender and enduringly powerful. Immediately after the president’s murder the following year, the picture of Lincoln reading to his son became a mass-produced icon—a cherished portrait of a nation’s fallen leader, a disarmingly intimate record of a care-worn father's feeling for his child, and a timeless comment on books as a binding force between generations.

Leonard S. Marcus is one of the world’s leading writers about children’s books and the people who create them. His own award-winning books include Randolph Caldecott: The Man Who Could Not Stop Drawing; Listening for Madeleine: A Portrait of Madeleine L'Engle in Many Voices; Dear Genius: The Letters of Ursula Nordstrom; Minders of Make Believe; and The Annotated Phantom Tollbooth. He lives in Brooklyn, New York.