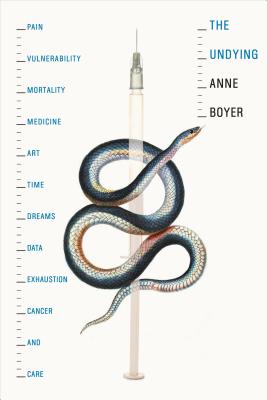 WINNER OF THE 2020 PULITZER PRIZE IN GENERAL NONFICTION

"The Undying is a startling, urgent intervention in our discourses about sickness and health, art and science, language and literature, and mortality and death. In dissecting what she terms 'the ideological regime of cancer,' Anne Boyer has produced a profound and unforgettable document on the experience of life itself." —Sally Rooney, author of Normal People

"Anne Boyer’s radically unsentimental account of cancer and the 'carcinogenosphere' obliterates cliche. By demonstrating how her utterly specific experience is also irreducibly social, she opens up new spaces for thinking and feeling together. The Undying is an outraged, beautiful, and brilliant work of embodied critique." —Ben Lerner, author of The Topeka School

A week after her forty-first birthday, the acclaimed poet Anne Boyer was diagnosed with highly aggressive triple-negative breast cancer. For a single mother living paycheck to paycheck who had always been the caregiver rather than the one needing care, the catastrophic illness was both a crisis and an initiation into new ideas about mortality and the gendered politics of illness.

A twenty-first-century Illness as Metaphor, as well as a harrowing memoir of survival, The Undying explores the experience of illness as mediated by digital screens, weaving in ancient Roman dream diarists, cancer hoaxers and fetishists, cancer vloggers, corporate lies, John Donne, pro-pain ”dolorists,” the ecological costs of chemotherapy, and the many little murders of capitalism. It excoriates the pharmaceutical industry and the bland hypocrisies of ”pink ribbon culture” while also diving into the long literary line of women writing about their own illnesses and ongoing deaths: Audre Lorde, Kathy Acker, Susan Sontag, and others.

A genre-bending memoir in the tradition of The Argonauts, The Undying will break your heart, make you angry enough to spit, and show you contemporary America as a thing both desperately ill and occasionally, perversely glorious.

Anne Boyer is a poet and essayist. She was the inaugural winner of the 2018 Cy Twombly Award for Poetry from the Foundation for Contemporary Arts and winner of the 2018 Whiting Award in nonfiction/poetry. Her books include A Handbook of Disappointed Fate as well as several books of poetry, including the 2016 CLMP Firecracker Award–winning Garments Against Women. She was born and raised in Kansas, and was educated in its public schools and libraries. Since 2011, Boyer has been a professor at the Kansas City Art Institute. She lives in Kansas City, Missouri.

PRAISE FOR THE UNDYING

"The pink ribbon, that ubiquitous emblem of breast cancer awareness, has long been an object of controversy and derision, but the poet and essayist Anne Boyer doesn’t just pull it loose, unfastening its dainty loop; she feeds it through a shredder and lights it on fire, incinerating its remains . . . [in her] extraordinary and furious new book." —Jennifer Szalai, The New York Times

"At the time of her diagnosis with an aggressive form of breast cancer, the poet Anne Boyer was 41 and a single parent. In her genre-defying memoir, Ms. Boyer, now 46, chronicles her struggle to survive not just the disease, but a brutal chemotherapy regime." —The New York Times

"Boyer’s book, ambitious in scope, is honed to a precision that feels hard-won. The politics of illness—how the profit motive determines life and damage and death; how victim blaming is enshrined; how social norms can disable and kill—have rarely been limned with such clarity and grace." —Lidija Haas, Harper's Magazine

"[A] rousing hybrid of memoir and manifesto . . . [The Undying] is memoir as anti-capitalist indictment, as biting cultural criticism, as vengeance. It suggests a new era in the politics of breast cancer, one that might look less like corporate sponsored marathons every October and more like the radical, confrontational AIDS activism of the 1980s. Arriving the year before an election that could set healthcare and disability policy for decades, The Undying warns us of the human costs of any system that prioritizes profit over lives." —Sascha Cohen, NPR

"So much of what Boyer writes here is crucial to any contemporary discussion of disease, pain, care, and capitalism. Her work goes far beyond a memoir of her diagnosis and treatment of breast cancer, into profound considerations of the politics of suffering any disease or being in any kind of pain under capitalism, and particularly under voracious for-profit private medicine. Boyer is not only a deeply intelligent thinker, but she is also an extraordinary writer." —Katie Da Cunha Lewin, Jezebel

"[Boyer's] writing is precise and comprehensive, intimate and philosophical; its self-awareness is so rigorous it feels almost extravagant. It’s hard to imagine how she made this book, so near to the agony it documents. Like Lorde, like Susan Sontag, this writer enters the hell of cancer with a practice of lucidity that somehow endures through lucidity’s excruciating loss." —Hilary Plum, Los Angeles Review of Books

"The Undying is the spellbinding result of a brilliant mind confined to the sickbed, facing the destruction of her body and her routine life . . . What Boyer and her breast cancer have in common is a brutally frank articulation of what festers in silence and sublimation. They are both hell-raisers." —Natasha Boyd, Los Angeles Review of Books

"Anne Boyer’s The Undying . . . is told with the exhilarating acuity that her other writing would lead you to expect; it’s hurtful and delirious to read . . . Pain is said to be the most isolating thing, but Anne Boyer has put the whole world in here." —Marina Vishmidt, Artforum Best of 2019

"Boyer lets the first person and cancer rattle each other, cheek by jowl . . . [her] real subject becomes the several varieties of precarity (social, economic, artistic) that cancer swiftly unobscures, rather than the cancer itself. This moves The Undying from the canon of the illness memoir or illness sociology into the newly burgeoning subgenre of accounts of mass indenture and debt." —Laura Kolbe, The Yale Review

"Boyer returns with a beautiful memoir about her battle with breast cancer . . . [The Undying] puts into sharp focus the economic toll cancer takes on women of limited means . . . and is stacked with revelatory observations . . . Boyer’s gorgeous language elevates this artful, piercing narrative well above the average medical memoir." —Publishers Weekly (starred review)

"This elegant and eviscerating memoir . . . cuts like a righteous blade through the familiar bland heroics of the breast cancer 'industry' . . . Call it a battle cry, call it a fury-fueled elegy, call it the work of a woman who will not be denied. In every way, The Undying should not be missed." —Colleen Mondor, Booklist (starred review)

"This memoir and meditation on . . . illness shines with the startling lines of a poet, the hard-won insight of a patient, and the deep awareness of the fragility and tenacity of our bodies. It deserves to be called a classic." —Stephen Sparks, Literary Hub

"Boyer is trying to pick up the junk on the side of the road that might help a future person who doesn’t die from her potentially terminal illness to have something to restart with. So that a future drowning subject has a flotation device that serves as a reality check. Maybe . . . the story of her adaptation can be converted into a resource for yours." —Lauren Berlant, 4Columns

"The Undying is an examination of how to write (or not) about breast cancer and at the same time an elegant, devastating example of such writing." —Sarah Resnick, Bookforum

"[The Undying is] a passionate and eloquent memoir about one woman's battle with breast cancer . . . [Boyer] takes us on a deeply personal journey into 'my body in pain,' 'eviscerating sadness,' and profound loss . . . Told with brutal clarity, this is a haunting testimony about death that is filled with life." —Kirkus Reviews (starred review)

"Boyer is determined to portray her pain in language, through a stunning and, yes, painful collage of poetic approaches . . . The Undying is an unforgettable artifact of physical suffering that refuses the myopic individualism of classic cancer narratives." —Liz Bowen, Public Books

"An elegant and unforgettable narrative about the brutality of illness and the capitalism of cancer care in America" —Brock Wilbur, The Pitch (Kansas City)

"The Undying is an unflinching account of how Boyer has survived a diagnosis of triple negative breast cancer in 2014. It’s mostly memoir but also includes divergences into medicine and history, examining how the condition can be traced back as far as ancient Persia, how grueling both the surgery and chemotherapy can be, how many of the drugs to remedy it are environmentally dangerous, and how industrialization and corporate medicine are part of the problem. There’s a lot going on here, all of it worth your time." —Dan Lybarger, The Pitch (Kansas City)

"Boyer’s memoir is written in flowing prose dotted with poetry, history, dark humor and science. Hers is a personal story placed firmly into a wider narrative about how we view breast cancer. She is unflinchingly aware of her book’s place in a culture awash with inspirational stories in which cancer survival is presented as personal triumph." —The Morning Sun (Pittsburgh Kansas)

"The Undying is the pink ribbon's undoing, a methodical and exquisite refusal of the contemporary moral and medical narratives pinned to the sick. Boyer explores near death and not-dying with a transfixing lust for life, drawing upon the cancer writings of Sontag, Lorde and Acker, as well as the accounts of YouTube vloggers, to construct this astonishingly generous work about her illness and the world's. It's a very important book." —Johanna Fateman

"A classic—a book that expands in all directions to fill an empty space in the literature of illness. I have long thought of Boyer as a genius against genius, speaking from the sea of people in a voice that cannot help but be heard above the others, it is so clear and strong. And The Undying is a book that is beautifully against: against cancer, against easy metaphors, above all against 'the pink ribbon on the for-sale sign on the mansion.'" —Patricia Lockwood, author of Priestdaddy

"This is a powerful, timely, and troubling book. Boyer's unflinching account of the market-driven brutality of American cancer care sits beside some of the most perceptive and beautiful writing about illness and pain that I have ever read." —Hari Kunzru, author of White Tears

"Anne Boyer is an essential voice, and this is an essential book: one body's urgent attempt at finding a language to tell us what it knows." —Jonathan Lethem, author of The Fortress of Solitude