Scandinavian Noir: In Pursuit of a Mystery (Hardcover) 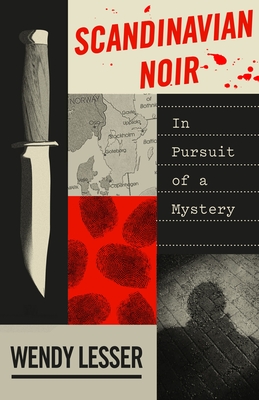 Scandinavian Noir: In Pursuit of a Mystery (Hardcover)

"Even those unmoved by its subject will thrill to [Scandinavian Noir], a beautifully crafted inquiry into fiction, reality, crime and place . . . Perhaps when it comes to fiction and reality, what we need most are critics like Lesser, who can dissect the former with the tools of the latter." --Kate Tuttle, The New York Times Book Review

For nearly four decades, Wendy Lesser's primary source of information about three Scandinavian countries—Sweden, Norway, and Denmark—was mystery and crime novels, and the murders committed and solved in their pages. Having never visited the region, Lesser constructed a fictional Scandinavia of her own making, something between a map, a portrait, and a cultural history of a place that both exists and does not exist. Lesser’s Scandinavia is disproportionately populated with police officers, but also with the stuff of everyday life, the likes of which are relayed in great detail in the novels she read: a fully realized world complete with its own traditions, customs, and, of course, people.

Over the course of many years, Lesser’s fictional Scandinavia grew more and more solidly visible to her, yet she never had a strong desire to visit the real countries that corresponded to the made-up ones. Until, she writes, “between one day and the next, that no longer seemed sufficient.” It was time to travel to Scandinavia.

With vivid storytelling and an astonishing command of the literature, Wendy Lesser’s Scandinavian Noir: In Pursuit of a Mystery illuminates the vast, peculiar world of Scandinavian noir—first as it appears on the page, then as it grows in her mind, and finally, in the summer of 2018, as it exists in reality. Guided by sharp criticism, evocative travel writing, and a whimsical need to discover “the difference between existence and imagination, reality and dream,” Scandinavian Noir is a thrilling and inventive literary adventure from a masterful writer and critic.

Wendy Lesser is the founder and editor of The Threepenny Review and the author of a novel and several books of nonfiction, including Music for Silenced Voices and Why I Read, which garnered rave reviews from coast to coast. She has written for The New York Times Book Review, the London Review of Books, The Times Literary Supplement, and other publications. She received one of the first National Endowment for the Humanities Public Scholar awards to complete You Say to Brick, her award-winning biography of Louis Khan.

"Even those unmoved by its subject will thrill to the book, a beautifully crafted inquiry into fiction, reality, crime and place . . . [Lesser's] engagement with the source material, hundreds of titles’ worth, is rigorous yet playful . . . Perhaps when it comes to fiction and reality, what we need most are critics like Lesser, who can dissect the former with the tools of the latter." --Kate Tuttle, The New York Times Book Review

"[A] lively, perceptive guide to Scandi noir . . . Lesser is an engaging and amiable guide to a cultural phenomenon that has swept much of the planet." --The Economist

"[An] exceptionally well-conceived cultural history . . . Lesser is remarkably encyclopedic in her knowledge of Nordic noir and easily conveys her enthusiasm to readers. This fine exploration of fiction as reality and reality as fiction will draw many readers to the authors she covers." --Publishers Weekly (starred review)

"An enthusiastic guide . . . Perfect for any die-hard fan of Scandinavian mysteries and culture." --Kirkus

"Whether readers are transfixed by the spectacular exploits of Lisbeth Salander, or impressed with the doggedness of Kurt Wallander, or even if they've never encountered these characters, they'll find in Scandinavian Noir an entertaining journey into the world of these mysteries and the cultural milieu that spawned them." --Shelf Awareness

“Wendy Lesser’s Scandinavian Noir is a rich and subtle exploration of both Nordic crime writing and the author’s personal passion for these novels. Lesser’s critically astute fascination leads her on a pilgrimage to the genre’s motherlands—Norway, Sweden, and Denmark—in order to embed herself in the people, culture, and politics that informed the various authors’ world-views. This too becomes a journey into the self, and finally a contemplation of how fiction, in its purposeful sculpting of the chaos of human experience into something more artfully coherent, can often render a greater truth than any objective reportage.” —Richard Price

“Even if you have never heard of Harry Hole or turned a page of Stieg Larsson, you will be fascinated by Scandinavian Noir, Wendy Lesser’s artful take on Nordic Noir fiction. Not merely a reflection on thousands of detective stories, this book is a subtle exposition of what it means to read, the miracle of suspending disbelief and thinking deeply simultaneously, and of inhabiting an imagined landscape that is ultimately your own.” —Scott Turow