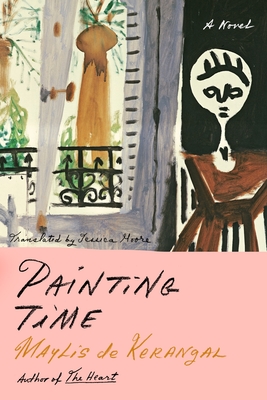 In Maylis de Kerangal’s Painting Time, we are introduced to the burgeoning young artist Paula Karst, who is enrolled at the famous Institut de Peinture in Brussels. Unlike the friends she makes at school, Paula strives to understand the specifics of what she’s painting—replicating a wood’s essence or a marble’s wear requires method, technique, and talent, she finds, but also something else: craftsmanship. She resolutely chooses the painstaking demands of craft over the abstraction of high art.

With the attention of a documentary filmmaker, de Kerangal follows Paula’s apprenticeship, punctuated by brushstrokes, hard work, sleepless nights, sore muscles, and long, festive evenings. After completing her studies at the Institute, Paula continues to practice her art in Paris, in Moscow, then in Italy on the sets of great films, all as if rehearsing for a grand finale: a job working on Lascaux IV, a facsimile reproduction of the world’s most famous paleolithic cave art and the apotheosis of human cultural expression.

An enchanted, atmospheric, and highly aesthetic coming-of-age novel, Painting Time is an intimate and unsparing exploration of craft, inspiration, and the contours of the contemporary art world. As she did in her acclaimed novels The Heart and The Cook, Maylis de Kerangal unravels a tightly wound professional world to reveal the beauty within.

Maylis de Kerangal is the author of several books in French, including Naissance d’un pont, (published in English as Birth of a Bridge), which won of the Prix Franz Hessel and Prix Médicis in 2010; Réparer les vivants, which won the Grand Prix RTL-Lire and the Student Choice Novel of the Year from France Culture and Télérama and whose English translation, The Heart, was one of the Wall Street Journal’s Ten Best Fiction Works of 2016 and the winner of the 2017 Wellcome Book Prize; and Un chemin de tables, whose English translation, The Cook, was a New York Times Book Review Editors’ Choice. She lives in Paris.

"There is something magnificently true about De Kerangal’s fiction, which braids technical fluency with winged prose . . . 'Capsules of pure sensation'–it’s a description worth stealing to describe this novel, which is strung together image by beautiful image. This is writing that defies haste, that slows the eye . . . That [De Kerangal's] new novel's painterly resonances feel elemental, rather than effortful, cements her reputation as one of contemporary fiction’s most gifted sentence builders." —Beejay Silcox, The Guardian

"[Decorative painting] is given a thrilling treatment in Maylis de Kerangal’s [Painting Time] . . . Who else writes with such poetry about the tools of trade, and the intricacies of work? Michael Ondaatje springs to mind, but Maylis de Kerangal is mining a rich and individual seam." —Jonathan Gibbs, Times Literary Supplement

"Celebrated French novelist Kerangal . . . is a master of the metaphysical bildungsroman . . . [An] enthralling tale of vocation, discovery, and love . . . Kerangal balances the gloriously sensuous with the deeply reflective in an exquisite and omniscient streaming narration as she explores the title's implications . . . Kerangal’s elegant, sexy, subtly Proustian, and fluidly dimensional drama of discipline and passion, imitation and imagination is resplendently evocative and exhilarating." —Donna Seaman, Booklist

"As she did with The Cook, award-winning French author de Kerangal offers stunning portraiture suffused with the joy and meaning of work. . .There's only one word for it: superbe." —Library Journal (starred review)