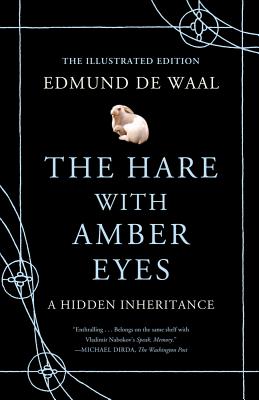 The definitive illustrated edition of the international bestseller

Two hundred and sixty-four Japanese wood and ivory carvings, none of them larger than a matchbox: Edmund de Waal was entranced when he first encountered the collection in his great-uncle Iggie's Tokyo apartment. When he later inherited the netsuke, they unlocked a far more dramatic story than he could ever have imagined.

From a burgeoning empire in Odessa to fin de siècle Paris, from occupied Vienna to postwar Tokyo, de Waal traces the netsuke's journey through generations of his remarkable family against the backdrop of a tumultuous century. With sumptuous photographs of the netsuke collection and full-color images from de Waal's family archive, the illustrated edition of The Hare with Amber Eyes transforms a deeply intimate saga into a work of visual art.

Edmund de Waal is an artist who has exhibited in museums and galleries around the world. His bestselling memoir, The Hare with Amber Eyes, has won many prizes and has been translated into twenty-nine languages. The White Road, a journey into the history of porcelain, was published in 2015. He lives in London with his family.

“Absorbing . . . In this book about people who defined themselves by the objects they owned, de Waal demonstrates that human stories are more powerful than even the greatest works of art.” —Adam Kirsch, The New Republic

“At one level [Edmund de Waal] writes in vivid detail of how the fortunes were used to establish the Ephrussis' lavish lives and high positions . . . And, as Jews, of their vulnerability: the Paris family shaken by turn-of-the-century anti-Semitism surging out of the Dreyfus affair; the Vienna branch utterly destroyed in Hitler's 1937 Anschluss . . . At a deeper level, though, Hare is about something more, just as Marcel Proust's masterpiece was about something more than the trappings of high society. As with Remembrance of Things Past, it uses the grandeur to light up interior matters: aspirations, passions, their passing; all in a duel, and a duet, of elegy and irony.” —Richard Eder, The Boston Sunday Globe

“To be handed a story as durable and exquisitely crafted as this is a rare pleasure . . . You have in your hands a masterpiece.” —Frances Wilson, The Sunday Times (London)

“A family memoir written with a grace and modesty that almost belie the sweep of its contents: Proust, Rilke, Japanese art, the rue de Monceau, Vienna during the Second World War. The most enchanting history lesson imaginable.” —Claudia Roth Pierpont, The New Yorker

“The book not only of the year, but of the decade.” —Michael Howard, The Times Literary Supplement

“As full of beauty and whimsy as a netsuke from the hands of a master carver. Buy two copies of his book; keep one and give the other to your closest bookish friend.” —The Economist