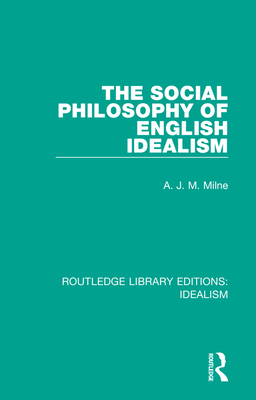 At the turn of the century Idealism was perhaps the leading school of philosophy in the English-speaking world. By the 1960s the situation was very different. There had occurred during the previous two generations what has been described as 'a revolution in philosophy', one consequence of which had been the almost total eclipse of Idealism. Originally published in 1962, this book is a critical study of certain aspects of the work of four Idealist philosophers: F. H. Bradley, T. H. Green, Bernard Bosanquet and Josiah Royce. It deals mainly with their social philosophy, but some consideration is also given to their metaphysics. It is the thesis of this book that there is a valid and significant form of Idealism to be found in the work of these philosophers, but that they did not succeed in developing it fully and consistently.