Verification: How Much Is Enough? (Paperback) 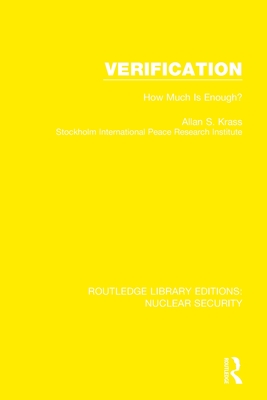 Verification: How Much Is Enough? (Paperback)

Originally published in 1985, the level of anxiety and suspicion between the USA and the USSR had rarely been higher. Many advocates of arms control believed that effective verification would reduce tensions and lessen the risk of war. This book analyses the two main issues of verification. One is technological: what are the present capabilities of various verification techniques and what is their potential? The devices and methods currently employed by the two major nuclear powers and by international organizations to monitor the compliance of states with arms control or disarmament treaties are examined. The second issue is political: how do US and Soviet approaches compare, what are the roles of domestic and bureaucratic politics, and on what criteria can a workable standard of adequacy be based? In short, how much is enough?

Although the study concludes that a number of significant arms control measures can already be adequately verified, modern weapons are becoming more mobile and it is becoming easier to conceal them. There is a danger that the ability to hide weapons will outstrip the ability to find them. Verification cannot promise to detect all violations; a workable standard of adequacy in verification must derive from the ability to detect militarily significant violations.