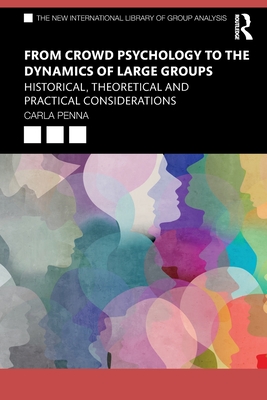 From Crowd Psychology to the Dynamics of Large Groups offers transdisciplinary research on the history of the study of social formations, ranging from nineteenth-century crowd psychology in France and twentieth-century Freudian mass psychology, including the developments in critical theory, to the study of the psychodynamics of contemporary large groups.

Carla Penna presents a unique combination of sociology, psychoanalysis, and group analysis in the study of social formations. This book revisits the epistemological basis of group analysis by introducing and discussing its historical path, especially in connection with the study of large groups and investigations of the social unconscious in persons, groups, and societies. It also explores early work on group relations and contemporary research on the basic-assumption group in England, particularly Hopper's theory of Incohesion as a fourth basic assumption. From Crowd Psychology to the Dynamics of Large Groups enables the reader to map out the field of the unconscious life of crowds illuminating the darkness of twenty-first century collective movements.

The reflections in this book present new perspectives for psychologists, psychoanalysts, group analysts, sociologists, and historians to investigate the psychodynamics of contemporary crowds, masses, and social systems.

Carla Penna, PhD, is a psychoanalyst and a group analyst in Brazil. She is a member of the Psychoanalytic Circle of Rio de Janeiro and the Group Analytic Society International.