Playing Through the Turnaround (Hardcover) 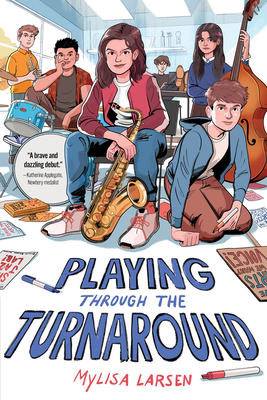 Playing Through the Turnaround (Hardcover)

In a timely, insightful story told with sparkling wit and heart, young musicians protesting plans for budget cuts navigate miscalculations, indifferent adults, and unexpected loss as they discover the power of speaking out and the value of listening.

“A brave and dazzling debut, this timely novel is a blueprint for hope.”—Katherine Applegate, Newbery Medalist and best-selling author of The One and Only Ivan

“Keen and clear and fiercely funny.”—Linda Sue Park, Newbery Medalist and best-selling author of A Long Walk to Water

“A splendid novel filled with honesty and heart.”—Karina Yan Glaser, best-selling author of the Vanderbeekers series.

Fifth period is hands down the best time of day in Connor U. Eubanks Middle School, because that’s when Mr. Lewis teaches Jazz Lab. So his students are devastated when their beloved teacher quits abruptly. Once they make a connection between budget cuts and Mr. Lewis’s disappearance, they hatch a plan: stop the cuts, save their class.

Soon, they become an unlikely band of crusaders, and their quest quickly snowballs into something much bigger—a movement involving the whole middle school. But the adults in charge seem determined to ignore their every protest. How can the kids make themselves heard?

Mylisa Larsen was born in Idaho, has lived in eight states and two countries, and currently resides in upstate New York with her family. She is the author of several picture books, including How to Put Your Parents to Bed, and the novel Playing Through the Turnaround. mylisalarsen.com.

“In an effort to get grown-ups to listen to them, middle schoolers do something extraordinary. So does Larsen, in her debut—by introducing characters so distinct and alive that each sparkles and yet becomes much more as they together tackle the challenging task of asserting their right to a say in their own educations. A magnificent medley of cogent themes and memorable moments.” — Kirkus Reviews (starred review)

"The perfect amount of tension draw[s] readers in to a funny, sad, and heartwarming story that celebrates the importance of independence, belonging, and the arts." — Horn Book Magazine

"With fast-paced, voice-driven chapters and a musical flair, this is perfect for readers of Carrie Firestone's Dress Coded (2020) and Maleeha Siddiqui's Barakah Beats (2021)." — Booklist

“[A] powerful portrayal of a ragtag group of students coming together to accomplish a common goal.” — Publishers Weekly (starred review)