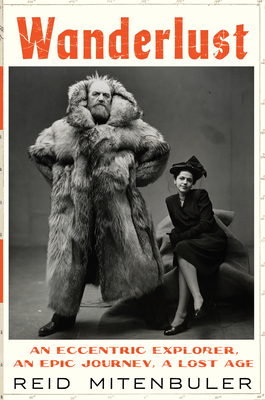 The mesmerizing, larger-than-life tale of an eccentric adventurer who traversed some of the greatest frontiers of the twentieth century, from uncharted Arctic wastelands to the underground resistance networks of World War II.

Deep in the Arctic wilderness, Peter Freuchen awoke to find himself buried alive under the snow. During a sudden blizzard the night before, he had taken shelter underneath his dogsled and become trapped there while he slept. Now, as feeling drained from his body, he managed to claw a hole through the ice only to find himself in even greater danger: his beard, wet with condensation from his struggling breath, had frozen to his sled runners and lashed his head in place, exposing it to icy winds that needed only a few minutes to kill him… But if Freuchen could escape that, he could escape anything.

Freuchen’s life seemed ripped from the pages of an adventure novel—and provided fodder for many books of his own. A wildly eccentric Dane with an out-of-nowhere sense of humor, his insatiable curiosity drove him from the twilight years of Arctic exploration to the Golden Age of Hollywood, and from the burgeoning field of climate research to the Danish underground during World War II. He conducted jaw-dropping expeditions, survived a Nazi prison camp, and overcame a devastating injury that robbed him of his foot and very nearly his life. Through it all, he was guided not only by restlessness but also by ideals that were remarkably ahead of his time, championing Indigenous communities, environmental stewardship, and starting conversations that continue today.

Meticulously researched and grippingly written, Wanderlust is an unforgettable tale of daring and discovery, an inspiring portrait of restlessness and grit, and a powerful meditation on our relationship to the planet and our fellow human beings. Reid Mitenbuler’s exquisite book restores a heroic giant of the last century back into public view.

“Wild Minds assembles its history with love and a sense of occasion . . . The book’s governing idea lies in its heroes’ collective intuition that animated films could be a vehicle for grownup expression—erotic, political, and even scientific—rather than the trailing diminutive form they mostly became . . . All art aspires to the condition of music, a wise man said once, and perhaps all cultural history aspires to the condition of a cartoon: a seeming fluidity of movement, made up of countless small stops and starts.” — Adam Gopnik, The New Yorker

“Wild Minds is a thoroughly captivating behind-the-scenes history of classic American animation, full of breezy stories of the great artists who went crazy making the brilliant cartoons we all know and love. A must-read for all fans of the medium!”  — Matt Groening, creator of The Simpsons and Futurama

“Juicy tales abound about the films and the wildly imaginative people who made them… [told] with relish and clarity.” — John Canemaker, Wall Street Journal, on Wild Minds

“Mitenbuler’s real target is a quintessentially American story of daring ambition, personal re-invention and the eternal tug-of-war of between art and business…a gem for anyone wanting to understand animation’s origin story.” — Adam Frank, NPR, on Wild Minds

“In this absorbing history of animation, Reid Mitenbuler illuminates lives both deservedly familiar (Walt Disney, Max Fleischer, Chuck Jones) and tragically forgotten (Winsor McCay, Émile Cohl). The prose is terrific, the insights frequent, and the information fascinating. Mitenbuler deepens one’s understanding not only of his subject, but the world itself. It’s everything you want a nonfiction book to be.” — Tom Bissell, author of Creative Types and coauthor of The Disaster Artist

“An absolutely vital compendium covering all high points, low points and pen points of the personalities who hijacked our pop culture—pioneering a now-dominant American industry, ultimately creating characters and films that have stood the text of time.  A delightful read—like the cartoons themselves: buoyant, bouncy and wonderfully entertaining.” — Jerry Beck, animation historian and author

“A finely drawn history of a critical period in the history of animation.” — Kirkus Reviews (starred review)

“Mitenbuler shows just how renegade the pioneers of animation were. In an era of different sensibilities, they used a nascent medium to get away with edgy gags, questionable violence and the darkest of gallows humor. Wild Minds is a journey into how animation became cultural insurgency.” — Scott Anderson, San Francisco Chronicle

“[A] rollicking history…[Mitenbuler] is able to sum up a character with a couple of quick strokes…Story comes first in Wild Minds.” — Michael Tisserand, New York Times

“[Mitenbuler] paints a delightfully full picture of the artform and its artists.” — Christian Science Monitor (Ten Best Books of December 2020)

“An entertaining and revealing look into the dawn of a revolutionary art form.”  — Library Journal

“Bourbon Empire is a lively, rowdy tale of swindlers and smugglers, connoisseurs and craftsmen. Reid Mitenbuler is a talented storyteller whose wide-ranging curiosity takes us to Civil War battlefields and prison cells as well as cornfields and world-famous distilleries. Truly fascinating, and a must-read for whiskey lovers!” — Amy Stewart, author of The Drunken Botanist

“Bourbon Empire is more than just whiskey history. Mitenbuler demonstrates, with clear, witty and incisive prose, how the drink shaped, and was shaped by, the history of American capitalism society. It is a book that whiskey fans, historians and students of American business will enjoy, and learn much from.” — Clay Risen, staff editor, The New York Times and author of American Whiskey, Bourbon & Rye

“A must have for every bourbon enthusiast from beginner to expert. A book that finally tells the true story of our beloved bourbon, putting in perspective its important role in American history. Bourbon Empire has it all, demystifying the good, the bad and the ugly.” — Sean Brock, Chef/Partner of McCrady’s and Husk

“In finding the facts behind some of bourbon’s most cherished fables, Mitenbuler has unearthed true tales that are even better than the tall tales. A fresh look at stories we thought we knew.” — Lew Bryson, managing editor, Whisky Advocate and author ofTasting Whiskey

“Reid manages to juggle his skepticism and enthusiasm in this carefully researched and lovingly written history of America’s spirit. He peels back layer after layer of filigree, searching for the real story, which is as much the story of American business, politics, advertising, and immigration as it is the story of bourbon.” — Max Watman, author of Harvest and Chasing the White Dog