The Wolves and Moose of Isle Royale: Restoring an Island Ecosystem (Scientists in the Field) (Hardcover) 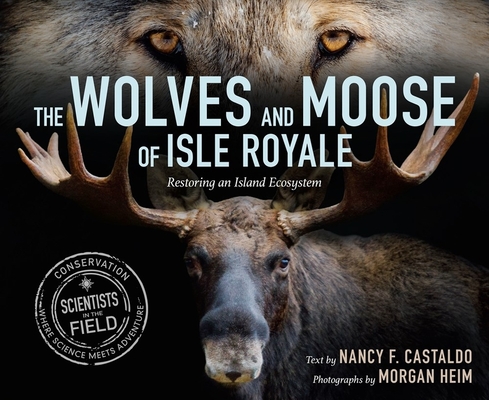 The Wolves and Moose of Isle Royale: Restoring an Island Ecosystem (Scientists in the Field) (Hardcover)

In this exhilarating installment of the award-winning Scientists in the Field series, journey to the isolated islands of Isle Royale National Park where the longest predator/prey study in the world is being conducted along with a controversial genetic rescue to save not only the wolves and moose, but the entire island ecosystem.

On Isle Royale, a unique national park more than fifty miles from the Michigan shore and about fifteen miles from Minnesota, a thrilling drama is unfolding between wolves and moose, the island’s ultimate predator and prey. For over sixty years, in what has been known as the longest study of predator and prey in the world, scientists have studied the wolves and moose of Isle Royale and the island’s ecology to observe and investigate wildlife populations. But due to illness and underlying factors, the population of wolves on the island has dropped while the number of moose has increased, putting the Isle Royale ecosystem in jeopardy.

Now, for the first time ever, scientists are intervening. Join celebrated author Nancy Castaldo in this exciting journey to Isle Royale to document the genetic rescue experiment scientists there are embarking on. If they can successfully relocate twenty to thirty wolves from the mainland to Isle Royale, scientists can potentially restore the balance among wolves, moose, and trees of the island's ecosystem. Now the living laboratory experiment begins.

Nancy Castaldo is the author of several nonfiction books for children, including The Wolves and Moose of Isle Royale and Sniffer Dogs: How Dogs (and Their Noses) Save the World. She lives in New York’s Hudson Valley. nancycastaldo.com