Free Speech And Why It Matters (Hardcover) 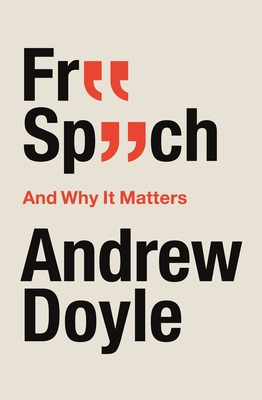 Free Speech And Why It Matters (Hardcover)

'Impassioned, scholarly and succinct' The Times

Free speech is the bedrock of all our liberties, and yet in recent years it has come to be mistrusted. A new form of social justice activism, which perceives language as potentially violent, has prompted a national debate on where the limitations of acceptable speech should be drawn. Governments throughout Europe have enacted 'hate speech' legislation to curb the dissemination of objectionable ideas, Silicon Valley tech giants are collaborating to ensure that they control the limitations of public discourse, and campaigners in the US are calling for revisions to the First Amendment.

However well-intentioned, these trends represent a threat to the freedoms that our ancestors fought and died to secure. In this incisive and fascinating book, Andrew Doyle addresses head-on the most common concerns of free speech sceptics, and offers a timely and robust defence of this most foundational of principles.

Andrew Doyle is a writer, broadcaster and satirist whose commentary on political and cultural issues is regularly published in the national press. He is a panellist on The Moral Maze (BBC Radio 4) and often appears on Sky News. In 2019, he toured the UK with his stand-up show Friendly Fire. He is the author, as Titania McGrath, of the satirical books Woke: A Guide to Social Justice and My First Little Book of Intersectional Activism. He has a doctorate in Renaissance literature from the University of Oxford, where he also worked as a stipendiary lecturer. He was formerly a Visiting Research Fellow at Queen's University, Belfast.
Impassioned, scholarly and succinct—Dominic Maxwell, The Times

Doyle's book is terse, restrained, and as carefully argued as a QC's summing-up in a top-drawer courtroom drama . . . a beautifully balanced and comprehensive overview—The Critic