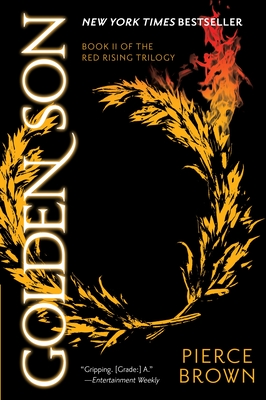 This is book number 2 in the Red Rising Series series.

NAMED ONE OF THE BEST BOOKS OF THE YEAR BY NPR, BUZZFEED, AND BOOKLIST • “Gripping . . . On virtually every level, this is a sequel that hates sequels—a perfect fit for a hero who already defies the tropes. [Grade:] A”—Entertainment Weekly

As a Red, Darrow grew up working the mines deep beneath the surface of Mars, enduring backbreaking labor while dreaming of the better future he was building for his descendants. But the Society he faithfully served was built on lies. Darrow’s kind have been betrayed and denied by their elitist masters, the Golds—and their only path to liberation is revolution. And so Darrow sacrifices himself in the name of the greater good for which Eo, his true love and inspiration, laid down her own life. He becomes a Gold, infiltrating their privileged realm so that he can destroy it from within.

A lamb among wolves in a cruel world, Darrow finds friendship, respect, and even love—but also the wrath of powerful rivals. To wage and win the war that will change humankind’s destiny, Darrow must confront the treachery arrayed against him, overcome his all-too-human desire for retribution—and strive not for violent revolt but a hopeful rebirth. Though the road ahead is fraught with danger and deceit, Darrow must choose to follow Eo’s principles of love and justice to free his people.

He must live for more.

“Stirring . . . Comparisons to The Hunger Games and Game of Thrones series are inevitable, for this tale has elements of both.”—Kirkus Reviews

“Brown writes layered, flawed characters . . . but plot is his most breathtaking strength. . . . Every action seems to flow into the next.”—NPR

“Gripping . . . Both author and lead character have cranked up the emotional stakes. . . . With Golden Son, [Pierce] Brown avoids the sophomore slump, charging the novel with the kind of dystopia-toppling action you’d expect in a trilogy ender, not a middle volume. On virtually every level, this is a sequel that hates sequels—a perfect fit for a hero who already defies the tropes. [Grade:] A”—Entertainment Weekly

“Stirring . . . Comparisons to The Hunger Games and Game of Thrones series are inevitable, for this tale has elements of both.”—Kirkus Reviews

“Brown writes layered, flawed characters . . . but plot is his most breathtaking strength. . . .  Every action seems to flow into the next.”—NPR

“It’s a far superior sequel, in fact: one of the rare breed of reads that improves upon its predecessor in every conceivable category. . . . In a word, Golden Son is stunning. Never mind how little we’ve seen of 2015: Among science fiction fans, it should be a shoo-in for book of the year.”—Tordotcom

“Pierce Brown is a prodigy. As great as the first book of the Red Rising Trilogy is, Golden Son is even better. A wild ride full of suspense, intrigue, and serious ass-kicking bravado, it’s expertly written and emotionally engaging, with top-notch universe-building that begs for further exploration. I want more!”—Christopher Golden, New York Times bestselling author of Snowblind

“The stakes are even higher than they were in Red Rising, and the twists and turns of the story are every bit as exciting. The jaw-dropper of an ending will leave readers hungry for the conclusion to Brown’s wholly original, completely thrilling saga.”—Booklist (starred review)

“Dramatic . . . the rare middle book that loses almost no momentum as it sets up the final installment.”—Publishers Weekly

“[A] spectacular adventure . . . one heart-pounding ride . . . Pierce Brown’s dizzyingly good debut novel evokes The Hunger Games, Lord of the Flies, and Ender’s Game. . . . [Red Rising] has everything it needs to become meteoric.”—Entertainment Weekly

“Compulsively readable and exceedingly entertaining . . . [a] must for both fans of classic sci-fi and fervent followers of new school dystopian epics.”—Examiner

“A story of vengeance, warfare and the quest for power . . . reminiscent of The Hunger Games and Game of Thrones.”—Kirkus Reviews

“Pierce Brown has done an astounding job at delivering a powerful piece of literature that will definitely make a mark in the minds of readers.”—The Huffington Post