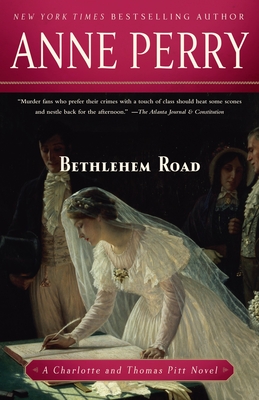 This is book number 10 in the Charlotte and Thomas Pitt series.

The gentleman tied to the lamppost on Westminster Bridge is most elegantly attired—fresh boutonniere, silk hat, white evening scarf—and he is quite, quite dead, as a result of his thoroughly cut throat. Why should anyone kill Sir Lockwood Hamilton, the kindest of family men and most conscientious member of Parliament? Before Inspector Thomas Pitt can even speculate on the reasons, a colleague of Sir Lockwood’s meets the same fate in the same spot. Public indignation is boundless, and clever Charlotte Pitt, Thomas’s wellborn wife, can’t resist helping her hard-pressed husband, scouting society’s drawing rooms for clues to these appalling crimes. Meanwhile, the Westminster Bridge Cutthroat stalks another victim.

Anne Perry is the bestselling author of two acclaimed series set in Victorian England: the Charlotte and Thomas Pitt novels, including Death on Blackheath and Midnight at Marble Arch, and the William Monk novels, including Blood on the Water and Blind Justice. She is also the author of a series of five World War I novels, as well as twelve holiday novels, most recently A New York Christmas, and a historical novel, The Sheen on the Silk, set in the Ottoman Empire. Anne Perry lives in Los Angeles and Scotland.
“Murder fans who prefer their crimes with a touch of class should heat some scones and nestle back for the afternoon.”—The Atlanta Journal & Constitution

“[Anne] Perry once again demonstrates her true and lively passion. . . . Her finely drawn characters couldn’t be more comfortable within the customs and sensibility of their historical period.”—The New York Times Book Review

“Perry uses her well-mannered prose, satiric wit and sense of place and time to construct a completely believable and human world. A sterling performance.”—Library Journal

“With a steady hand at dissecting character and motivation, a keen grasp of social history and a flair for description of Victorian London, Perry guarantees a good read to those who like their murder in a believable historical and psychological context.”—Publishers Weekly