The Sins of the Wolf: A William Monk Novel (Paperback) 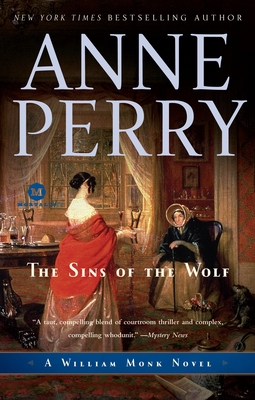 The Sins of the Wolf: A William Monk Novel (Paperback)

This is book number 5 in the William Monk series.

Nurse Hester Latterly finds herself well suited for the task: accompany Mrs. Mary Farraline, an elderly Scottish lady in delicate health, on a short train trip to London. Yet Hester’s simple job takes a grave turn when Mrs. Farraline dies during the night. And when a postmortem examination of the body reveals a lethal dose of medicine, Hester is charged with murder–punishable by execution.

This notorious case presents detective William Monk with a daunting task: find a calculating killer among the prominent and coolly unassailable Farraline clan–and try to save Hester from the gallows.
Anne Perry is the bestselling author of two acclaimed series set in Victorian England: the William Monk novels, including Blind Justice and A Sunless Sea, the Charlotte and Thomas Pitt novels, including Death on Blackheath and Midnight at Marble Arch. She is also the author of a series of five World War I novels, as well as eleven holiday novels, most recently A New York Christmas, and a historical novel, The Sheen on the Silk, set in the Ottoman Empire. Anne Perry lives in Scotland and Los Angeles.
“Perry [has two] strengths: memorable characters and an ability to evoke the Victorian era with the finely wrought detail of a miniaturist.”—Wall Street Journal

“A mesmerizing courtroom drama [and] a plot that’s filled with surprising twists and unexpected suspense.”—Booklist

“When it comes to the Victorian mystery, Anne Perry has proved that nobody does it better.”—San Diego Union-Tribune