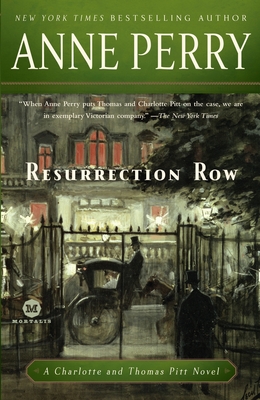 This is book number 4 in the Charlotte and Thomas Pitt series.

It is a most incredible sight: a corpse sitting at the reins of a hansom cab–and not just any corpse, but the body of a peer of the realm. To Inspector Thomas Pitt and his wife, Charlotte, this macabre apparition seems like sheer lunacy. Who would ever want to exhume a decently buried old chap like Lord Augustus Fitzroy-Hammond?

A doctor insists that Lord Augustus’s death was natural. But as far as the police are concerned, there’s certainly nothing natural about any of this gristly aftermath. Inspector Pitt is determined to unearth the truth–even if the digging puts his own life at perilous risk.
Anne Perry is the bestselling author of two acclaimed series set in Victorian England: the Charlotte and Thomas Pitt novels, including Death on Blackheath and Midnight at Marble Arch, and the William Monk novels, including Blood on the Water and Blind Justice. She is also the author of a series of five World War I novels, as well as twelve holiday novels, most recently A New York Christmas, and a historical novel, The Sheen on the Silk, set in the Ottoman Empire. Anne Perry lives in Los Angeles and Scotland.
“Few mystery writers this side of Arthur Conan Doyle can evoke Victorian London with such relish for detail and mood.”—San Francisco Chronicle

“Anne Perry has made the Victorian era her own literary preserve. . . . Perry’s work is consistently top-notch.”—San Diego Union

“Perry is my choice for today’s best mystery writer of Victoriana.”—St. Louis Post-Dispatch

“When Anne Perry puts Thomas and Charlotte Pitt on the case, we are in exemplary Victorian company.”—New York Times