Penny Arcade 6: The Halls Below (Paperback) 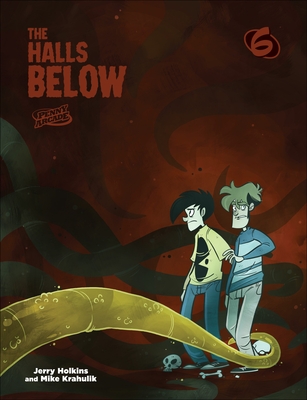 Penny Arcade 6: The Halls Below (Paperback)

This is book number 6 in the Penny Arcade series.


FROM UNTOLD STYGIAN DEPTHS, IT RISES

Gaze, if you dare, in benumbed awe upon its unfathomably cyclopean dimensions of obsidian impossibility. Cower before its undulating, multitendriled tales of unutterable horror. Receive into trembling hands that which the nameless ancients foretold in dread whispers that echo still across the black and terrible chasm whence forgotten time disgorges its haunted secrets, etc. Behold—the sixth tome of the Penny Arcade cycle!

Peer within and find
• 2005’s full-color Penny Arcade strips in their behemoth entirety!
• The soul-chilling ramblings of its warped, only partially human creators!
• And more, which no coherent mind could fathom nor human tongue repeat!
JERRY HOLKINS is the writer of the webcomic Penny Arcade. Holkins also writes the majority of the news posts or rants that accompany each comic. His other exploits include being a lead singer/guitarist in a band called The Fine Print, whose works are freely available over the internet. In the webcomic, his alter ego is known as Tycho Brahe. Holkins lives in the Seattle, Washington area.

Mike Krahulik is the artist for the webcomic Penny Arcade. Krahulik credits cartoonist Stephen Silver as a major influence on his drawing style, which has continued to evolve since he began drawing Penny Arcade in 1998. He also provided the illustrations for the cover of the book Agent to the Stars by John Scalzi, and artwork for the Daily Victim, a regular feature that used to run on GameSpy.com. In the webcomic, his alter ego is Jonathan Gabriel, or simply Gabe. Krahulik lives in the Seattle, Washington area.