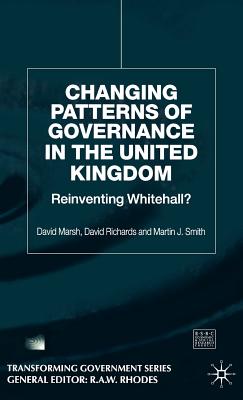 
Not On Our Shelves—Ships in 1-5 Days
This is the first comprehensive examination of the changing relations between ministers and civil servants since 1979. Based on an original account of power within central government and drawing on evidence compiled from over one hundred and fifty interviews, this book provides unprecedented insight into the world of Whitehall. As well as exploring the impact of eighteen years of Conservative government, the authors also examine the external pressures exerted by factors such as the European Union. They conclude by arguing that, despite recent claims about the end of the Whitehall model, many of the old features of the British system remain. Indeed, March, Richards and Smith demonstrate that departments continue to be key institutions in the policymaking process.
DAVID MARSH is Professor of Politics at the University of Birmingham. Recent publications include Comparing Policy Networks. DAVID RICHARDS is Lecturer in Politics at the University of Liverpool. Recent publications include The Civil Service Under the Conservatives. MARTIN J. SMITH is Professor of Politics at the University of Sheffield. Recent publications include The Core Executive in Britain.