Containing Germany: Britain and the Arming of the Federal Republic (Contemporary History in Context) (Hardcover) 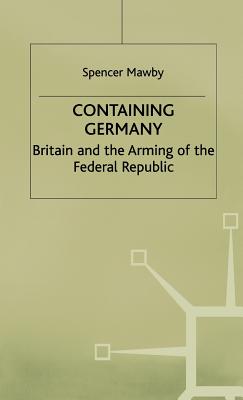 Containing Germany: Britain and the Arming of the Federal Republic (Contemporary History in Context) (Hardcover)


Not On Our Shelves—Ships in 1-5 Days
(This book cannot be returned.)
This book presents a radical reappraisal of British policy towards West German rearmament until the Federal Republic's incorporation into NATO and contains a series of major new theses on British attitudes towards European integration, Anglo-Soviet relations and the 'Special Relationship'. It places policy in the context of Anglo-German distrust, American demands for a German contribution and British fears of antagonising the Soviets. It clarifies numerous controversial issues by demonstrating British willingness to compromise with the Soviets over German unification, the British military's desire to reduce the continental commitment and Eden's enthusiasm for a European Army.
SPENCER MAWBY teaches International History at the London School of Economics, where he has taught since 1995 and took his doctorate. He has studied at the University of Durham, University College of Wales, Aberystwyth and the London School of Economics