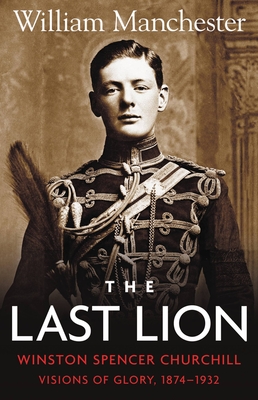 
Special Order—Subject to Availability
The first volume in William Manchester's masterful, magnum opus account of Winston Churchill's life. The Last Lion: Visions of Glory follows the first fifty-eight years of Churchill's life--the years that mold him into the man who will become one of the most influential politicians of the twentieth century.

In this, the first volume, Manchester follows Churchill from his birth to 1932, when he began to warn against the re-militarization of Germany. Born of an American mother and the gifted but unstable son of a duke, his childhood was one of wretched neglect. He sought glory on the battlefields of Cuba, Sudan, India, South Africa and the trenches of France. In Parliament he was the prime force behind the creation of Iraq and Jordan, laid the groundwork for the birth of Israel, and negotiated the independence of the Irish Free State. Yet, as Chancellor of the Exchequer he plunged England into economic crisis, and his fruitless attempt to suppress Gandhi's quest for Indian independence brought political chaos to Britain.

Throughout, Churchill learned the lessons that would prepare him for the storm to come, and as the 1930's began, he readied himself for the coming battle against Nazism--an evil the world had never before seen.
William Manchester was a hugely successful popular historian and biographer whose books include The Last Lion, Volumes 1 and 2, Goodbye Darkness, A World Lit Only by Fire, The Glory and the Dream, The Arms of Krupp, American Caesar, The Death of the President, and assorted works of journalism.

"Absolutely magnificent . . . a delight to read . . . one of those books
you devour line by line and word by word and finally hate to see end."—Russell Baker

"Manchester has read further, thought harder, and told with
considerable verve what is mesmerizing in [Churchill's] drama. . . . One
cannot do better than this book."—Philadelphia Inquirer

"An altogether absorbing popular biography . . . The heroic Churchill is
in these pages, but so is the little boy writing forlorn letters to the
father who all but ignored him."—People

"Superb . . . [Manchester] pulls together the multitudinous facets of
one of the richest lives ever to be chronicled. . . . Churchill and
Manchester were clearly made for each other."—Chicago Tribune

"Adds a grand dimension . . . rich in historical and social contexts.—Time