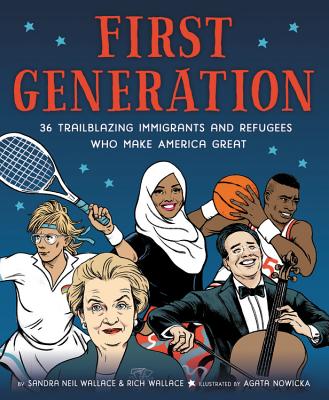 
Not On Our Shelves—Ships in 1-5 Days
Celebrate the genius, diversity, and grit of immigrants and refugees in this boldly illustrated guide to 36 American trailblazers.

The men and women in this book represent nations from Somalia to Germany, from Syria to China, from Mexico to Sweden, and more. They are people like Secretary of State Madeleine Albright, international singing sensation Celia Cruz, star basketball player Dikembe Mutombo, world-renowned physicist Albert Einstein, and influential journalist Jorge Ramos. And they are all immigrants or refugees to the United States of America. Their courage, their achievements, and their determination to change the world have helped make our country a stronger place. Perhaps after reading their stories, you will be inspired to make the world a better place, too.
Investigative journalists Sandra Neil Wallace and Rich Wallace are award-winning novelists and nonfiction authors of books like Blood Brother: Jonathan Daniels and His Sacrifice for Civil Rights and Bound by Ice: A True North Pole Survival Story. Sandra is a former news anchor and ESPN sportscaster. The daughter of a refugee, she became a US citizen in 2016. Rich was a longtime senior editor at Highlights magazine. Both Sandra and Rich are members of the advisory council for the Cohen Center for Holocaust and Genocide Studies at Keene State College and are founding members of the Keene Immigrant and Refugee Partnership. They live in New Hampshire.

Agata Nowicka is an illustrator and a comics artist. She spent her childhood drawing on everything with everything, including her mother's red lipstick on the staircase walls. She became an illustrator because she never wanted to stop drawing. Agata immigrated to the United States from Warsaw, Poland and now lives in New York City.
A Kirkus Reviews Best Book of 2018

"A book all children should read or have read to them."—The New York Times

* "A deeply patriotic look at how immigrants' application of the American ideals of hard work and perseverance can have lasting effects."
—Kirkus Reviews, starred review

"Engaging... A fascinating and robust collection. Readers will be eager to explore the various subjects and their accomplishments across all fields."
—School Library Journal

"This book is a treasure to show children the value of diverse cultures, and that those who come to America, help make America a wonderful, colorful, and brilliant country."—PamelaKramer.com

"The authors and artist have skillfully presented the stories and challenges of 36 immigrants and refugees who have all made enormous contributions to our nation."—The San Jose Mercury News