Race of Aces: WWII's Elite Airmen and the Epic Battle to Become the Master of the Sky (Hardcover) 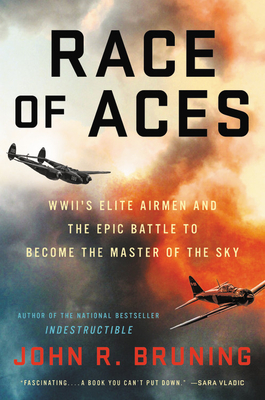 Race of Aces: WWII's Elite Airmen and the Epic Battle to Become the Master of the Sky (Hardcover)


Not On Our Shelves—Ships in 1-5 Days
The astonishing untold story of the WWII airmen who risked it all in the deadly race to become the greatest American fighter pilot.
In 1942, America's deadliest fighter pilot, or "ace of aces" -- the legendary Eddie Rickenbacker -- offered a bottle of bourbon to the first U.S. fighter pilot to break his record of twenty-six enemy planes shot down. Seizing on the challenge to motivate his men, General George Kenney promoted what they would come to call the "race of aces" as a way of boosting the spirits of his war-weary command.
What developed was a wild three-year sprint for fame and glory, and the chance to be called America's greatest fighter pilot. The story has never been told until now.
Based on new research and full of revelations, John Bruning's brilliant, original book tells the story of how five American pilots contended for personal glory in the Pacific while leading Kenney's resurgent air force against the most formidable enemy America ever faced.
The pilots -- Richard Bong, Tommy McGuire, Neel Kearby, Charles MacDonald and Gerald Johnson -- riveted the nation as they contended for Rickenbacker's crown. As their scores mounted, they transformed themselves from farm boys and aspiring dentists into artists of the modern dogfight.
But as the race reached its climax, some of the pilots began to see how the spotlight warped their sense of duty. They emerged as leaders, beloved by their men as they chose selfless devotion over national accolades.
Teeming with action all across the vast Pacific theater, Race of Aces is a fascinating exploration of the boundary between honorable duty, personal glory, and the complex landscape of the human heart.
"Brings you into the cockpit of the lethal, fast-paced world of fighter pilots . . . Fascinating." -- Sara Vladic"Extraordinary . . . a must-read." -- US Navy Captain Dan Pedersen"A heart-pounding narrative of the courage, sacrifice, and tragedy of America's elite fighter pilots." -- James M. Scott"Vivid and gripping . . . Confirms Bruning's status as the premier war historian of the air." -- Saul David
John R. Bruning is the author or collaborating writer of the national bestseller, Indestructible, as well as Outlaw Platoon written with Sean Parnell, Shadow of the Sword with Jeremiah Workman, How to Break a Terrorist with Matthew Alexander, House to House with David Bellavia, The Devil's Sandbox, and Ghost: Confessions of a Counterterrorism Agent with Fred Burton. Bruning is well traveled as an embedded combat correspondent. For his reporting in Afghanistan, the Department of Defense presented him with the Thomas Jefferson Award in 2010. For his work with the Oregon National Guard, he was inducted into the 162nd Infantry Regiment in September 2011 as an honorary member. John lives in Independence, Oregon, and has two children.
"Bruning is at his best when he delves into the pilots' anguish and obsessions...[his] work is a testament and a memorial not just to a handful of tragic heroes, but to those left bereft by this unique and explosive competition on the other side of the world."—The New York Times

"Race of Aces fascinates because of its attention to detail and strong characterization of these remarkable men."
—The Wall Street Journal

"Race of Aces brings you into the cockpit of the lethal, fast-paced world of fighter pilots as they strive to achieve ace-level status...Bruning's unique and intimate look at the struggles of these men to balance honor, duty to country, and their pursuit to be the best makes this account even more fascinating. This is a book you can't put down, and a story you will reflect upon long after turning the last page."—Sara Vladic, New York Times bestselling coauthor of Indianapolis

"[Bruning] crafts vivid profiles of the Army Air Forces fight pilots... their struggles, both personal and military, are movingly told....Exquisitely polished prose alternately describes the dog-fighting above remote jungles and relationships with sweethearts back home. Prodigious digging into mission reports, old newspaper dispatches, diaries and correspondence plus extensive interviews of survivors and family members contribute to a sweeping narrative that is likely to be the definitive history of the Rickenbacker-inspired contest. Highly recommended."—Philip Handleman, Aviation History

"Race of Aces is a superb read, taking us through the high-stakes world of our great Aces and the WWII air war...Extraordinary. Wear your G suit and hang on -- this must-read will become a classic."—Dan Pedersen, Founder of the Topgun program and bestselling author of Topgun: An American Story

"The riveting and emotional story of five American fighter pilots caught up in a deadly competition to claim the title of our nation's Ace of Aces, this book is so powerfully written that you can almost smell the engine exhaust and feel the G-forces in those furious dogfights. Race of Aces is quite simply is one of the best books ever written on World War II and cements Bruning's place as one of our generation's best combat historians."—David Bellavia, Medal of Honor Recipient and author of House to House: A Soldier's Memoir

"In Race of Aces, John R. Bruning brilliantly recreates the excitement and terror of one of the greatest untold stories of World War II: the nerve-shredding three-year contest to become America's deadliest fighter pilot. Exhaustively researched and expertly written -- with dogfights as vivid and gripping as any I've read -- the book confirms Bruning's status as the premier war historian of the air."—Saul David, author of The Force and Operation Thunderbolt

"A heart-pounding
narrative of the courage, sacrifice, and tragedy of America's elite fighter
pilots during World War II. With a cockpit view of the fight, readers will hear
the roar of the engines, feel the surge of adrenaline, and wrestle with the
exhaustion that gripped these aviators in the marathon battle to become
America's top fighter pilot."—James M. Scott, Pulitzer Prize finalist and bestselling author of Target Tokyo and Rampage

“Enthralling… Part five-sided biography, part adventure tale, part reflection on the price of fame, John Bruning’s story of the fighter jocks who chased glory is a fantastic read. Paced like a novel and filled with characters and exploits straight out of blockbuster movies, Race of Aces could be mistaken for the stuff of fiction. That its cast of Pacific theater Army Air Corps flyers—Bong, McGuire, Kearby, MacDonald, Johnson—may be relatively unknown to navalists more familiar with Vraciu and McCampbell adds to the air of the unbelievable. However, these men and their feats of derring-do were very real, and in Race of Aces they are brought to life by Bruning’s meticulous research and smooth prose….[F]ast-paced, well researched, exciting, engrossing, sobering….The book is a page-turner in the truest sense and captures the relentless pace of aerial combat in the Pacific, while contrasting it with the victors’ surreal return home and the toll of relentless war on the pilots who fought it.”—U.S. Naval Institute

"With deft, grit, and no shying away from the horrifying realities of war, Bruning...brings these heroes back to life, defining the struggles of morality, mortality, and glory that suffused their careers....[R]ich with historical information, Race of Aces reads like a novel and features interactions with figures such as Eddie Rickenbacker and Charles Lindbergh. Bruning's suspenseful storytelling utilizes personal interviews with U.S. Army Air Forces (USAAF) veterans, oral histories, archives, military history agencies, and letters/diaries written by the aces themselves....Eloquent and finely researched."—Library Journal (starred review)